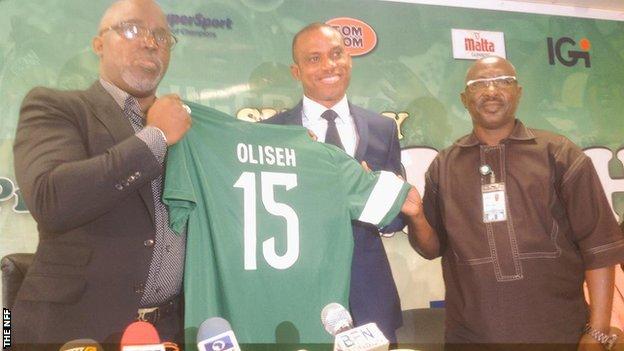 The 40-year-old has signed a three-year deal and succeeds Stephen Keshi, who was sacked at the start of July.

"We have the talent to change our fortunes, to regain the respect we once had and match that with results," Oliseh told BBC Sport.

"This is the biggest job in African football. With everyone's support we can get the Super Eagles flying again."

Oliseh, who earned 63 caps for Nigeria and helped his country win the 1994 Africa Cup of Nations and Olympic gold in 1996, takes the helm at a time when Nigeria are struggling on and off the field.

Political fighting within the Nigeria Football Federation (NFF) and poor results on the pitch - culminating in the Super Eagles failing to qualify to defend their 2013 Nations Cup title this year - have left Nigerian football in a mess.

The former Borussia Dortmund, Ajax and Juventus player is well aware of the size of the task he faces.

"I am here today because I believe in the NFF and the big project before us. We had a passionate discussion and the result is the mandate to manage Nigeria," he said.

"The job doesn't start tomorrow, it starts now, we need the support of everyone because together we can make our country great."

A member of the 'golden generation' of Nigerian football stars - alongside Jay-Jay Okocha, Nwankwo Kanu and Finidi George - Oliseh has been working as a pundit, sport consultant and Fifa Technical committee member.

He becomes the fourth player from the class of 1994 to manage the Super Eagles after Austin Eguavoen, Samson Siasia and Keshi.

While Oliseh has little management experience, having coached only Belgian lower league side Vervietois between 2008 and 2009, he does hold the Uefa Pro Licence and the NFF have every faith he can handle the challenge of coaching the Super Eagles.

"Oliseh has all the necessary knowledge and exposure we're looking for to take the country's football to a great height," said NFF president Amaju Pinnick.

"He shares our vision, received the approval of our sports ministry, the blessings of the NFF technical committee and executive board."

Oliseh, who will be assisted by Belgian coach Jean Francois Losciuto, will immediately begin the task of preparing the Super Eagles for the 2017 Africa Cup of Nations qualifier away to Tanzania in the first week of September, as well as an international friendly days later.

"There is no time to waste. The team has important matches in the next few weeks and it is imperative that Oliseh starts work immediately," NFF General Secretary, Dr. Mohammed Sanusi said.

Nigeria beat Chad 2-0 in their Group G opener in June and are second in the table behind Egypt on goal difference.