The Republic of Ireland produced a stunning victory over world champions Germany to leave automatic qualification for Euro 2016 in their own hands.

Substitute Shane Long's sublime 70th-minute finish from a long kick by keeper Darren Randolph, on for injured Shay Given, secured a memorable win.

Joachim Low's side dominated possession in Dublin but could not find the net.

The Republic will qualify if they defeat Poland in Warsaw on Sunday.

They are already guaranteed at least a play-off place, with Scotland able to finish no higher than fourth.

Jerome Boateng headed over for the visitors before Ilkay Gundogan, Andre Schurrle and Thomas Muller wasted chances as the Republic recorded the most important win of Martin O'Neill's two-year reign.

What the Republic need to do

Home fans celebrated an astonishing victory wildly at the final whistle, yet O'Neill's men still have work to do if they are to join England and Northern Ireland at next summer's tournament in France.

With one round of games remaining on Sunday, Germany - who entertain Georgia - still top Group D with 19 points from nine games while Poland and the Republic are one point behind on 18.

It all points to a thrilling climax to the qualification campaign.

Victory in Warsaw will seal the Republic's third European Championship qualification, whereas a defeat will mean they would have to qualify through the play-offs. 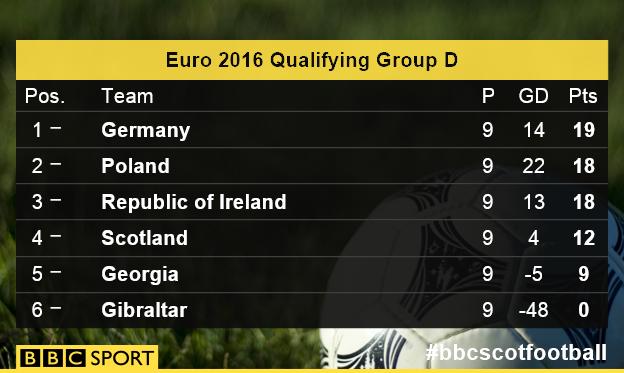 A draw would leave both Poland and the Republic on 19 points - and as to who would clinch second place (assuming Germany do not lose to Georgia), with head-to-head records the top tiebreaker, here's how it works:

Read Uefa's rules and regulations about qualifying for Euro 2016

Where did this win come from?

Few predicted a Republic of Ireland victory before the game and it looked ominous for the hosts as Germany dominated possession from the start.

Yet for all their dominance, the 2014 World Cup winners did not register a shot on target until after half-time.

The Republic's cause was not helped when Shay Given, one of six players aged 30 or over in O'Neill's line-up, went off with a twisted knee shortly before the interval.

Yet the longer the game remained goalless, the more confident the hosts became, with two substitutes combining for the winner.

The Route One winner

The goal was as simple as they come.

A long kick forward by Randolph from his own area landed deep in Germany's half and Long allowed the ball to bounce once before the Southampton forward lashed past a hapless Manuel Neuer with an exquisite finish.

The Republic were forced to endure a tense finish as substitute Schurrle fired wastefully over the bar on the stretch before Muller blazed another chance wide.

The final whistle was greeted with an enormous roar inside the Aviva Stadium as the former European champions - who won Euro 96, having also triumphed in 1972 and 1980 as West Germany - fell to a rare defeat.

Man of the match - Shane Long

Germany manager Joachim Low: "It was an unexpected and totally unnecessary defeat.

"We made our own life difficult. We have to be more ice-cold.

"Ultimately, we lacked the ultimate consequence and the last pass, and then we made a single mistake and it is a goal.

"Normally we score but there are the occasional matches where we make very little out of a lot of chances."