Northern Ireland have qualified for the Euro 2016 finals by beating Greece 3-1 on a brilliant night at Windsor Park.

Two goals by skipper Steven Davis and one by stand-in striker Josh Magennis sent them through to a major tournament for the first time in 30 years.

Davis forced in a first-half goal, and then headers by Magennis and Davis ensured Northern Ireland were going to their first European finals.

Christos Aravidis got a late goal for Greece but it did not spoil the party.

With Romania drawing 1-1 at home to Finland, Northern Ireland will top Group F if they get a point in Finland on Sunday in their final qualifier.

Captain Davis was one year old and Kilmarnock player Magennis not even born the last time Northern Ireland competed at a major finals - the 1986 World Cup when Billy Bingham was manager and the team included Pat Jennings, Mal Donaghy and Norman Whiteside.

Northern Ireland fans had endured 14 unsuccessful qualifying campaigns since then, but those repeated disappointments made Thursday night's celebrations all the sweeter. 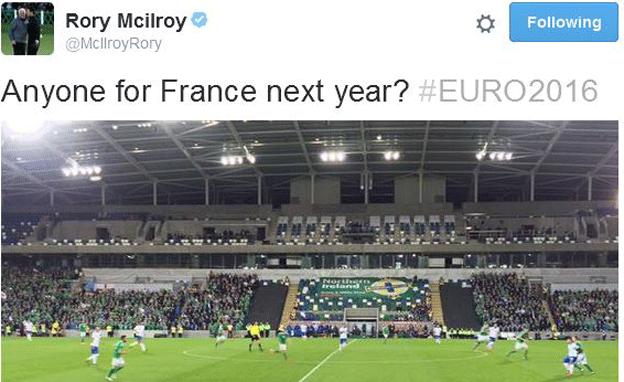 Southampton midfielder Davis stretched to score his first goal in 13 games for his country after Stuart Dallas had delivered the ball low from the right.

Magennis netted a looping header from an Oliver Norwood corner on 49 minutes and nine minutes later Davis made it three with a well-placed header.

It was a first international goal for 25-year-old Magennis, who played for Northern Ireland as a goalkeeper at Under-17 level.

When his club Cardiff City told the teenager from Bangor, County Down, he would not make it as a keeper, he was offered the chance to become a striker.

It was an opportunity he grabbed and has gone on to make a career in the Scottish Premiership.

The suspension of Kyle Lafferty, who had scored seven goals in this qualifying campaign, handed Magennis his chance to shine on the international stage and he celebrated his goal at Windsor Park by running into the arms of manager Michael O'Neill on the touchline.

Man of the match - Davis at the double

It was a case of captain fantastic as Steven Davis scored in both halves.

The midfielder netted for the first time in 13 Northern Ireland games when he opened the scoring 10 minutes before half-time. He later made it 3-0 with a well-placed header to cap a memorable night.

After the final whistle, the supporters known as the Green and White Army refused to leave the ground, singing in celebration as the realisation that so many years of hurt were over, began to sink in.

They were rewarded with an encore as their players came back out for a lap of honour.

Predictably, manager O'Neill got a special ovation as he was joined on the pitch by his two daughters and also lifted up by this players.

Beating all the odds

Few would have given Northern Ireland much hope of reaching the expanded Euro finals, coming after a dismal qualifying campaign for the 2014 World Cup in which O'Neill's men lost to Luxembourg and could not beat Azerbaijan.

Even going into Thursday's match, there were doubts as Northern Ireland were without four key players in suspended Lafferty, Chris Baird and Conor McLaughlin and injured Jonny Evans.

But it all went right on the night at the partly-rebuilt Windsor Park, and O'Neill's men are top on 20 points and have scored most goals in the group.

Now 12 December has been put in the diary as that is when the draw for next year's finals takes place in Paris.

What the boss said:

"We have to enjoy tonight, we have got a three-point gap now. Our objective was to qualify and we've done that. It is a lovely position to be in going into the last game."