England made it nine wins out of nine in their Euro 2016 qualifying campaign with a comfortable win over Estonia at Wembley.

Roy Hodgson's side have already qualified for France next summer and even without injured captain Wayne Rooney were able to dismiss Estonia with barely an anxious moment.

Rooney received a Golden Boot from Sir Bobby Charlton before kick-off after breaking his England goalscoring record with his 50th goal from the penalty spot in the last qualifier against Switzerland at Wembley.

There was barely a moment of note in the first 45 minutes until man-of-the-match Ross Barkley picked out Theo Walcott with a superb pass to score with the last kick of the half.

And England's latest victory was sealed in the dying moments when substitute Jamie Vardy unselfishly set up a second from close range for Raheem Sterling.

Hodgson clearly admires Everton's 21-year-old Barkley - but would he trust him enough to start with him in a vital Euros or World Cup game?

The dilemma is that while there are those who question Barkley's decision-making and occasional positional naivety, this is a player who can change games, a natural talent that can offer up moments that will unlock the best defences.

All sides of his game were on show at Wembley, but most of all the skills and bold approach that suggests England and Hodgson possess a rare gem.

Yes, there were moments when he tried the extra touch, held on to the ball too long and over-complicated matters but they were far outweighed by the moments that excited the Wembley crowd of 75,427.

Barkley had the vision and technique to pick out Walcott for his goal and demonstrated fast footwork and balance to fire one shot just wide, then bring a superb save from Estonia keeper Mihkel Aksalu.

It is more profitable for England and Hodgson to concentrate on what he can do rather than what he cannot.

The issue is whether Hodgson can harness his unpredictability into his England framework. If he can do that before the Euros next summer, and Barkley can iron out those rough edges, then he will have a potent weapon.

Walcott was on target again against Estonia to continue his development into a reliable and regular goalscorer.

His recent goal in Arsenal's 5-2 win at Leicester City was his 12th in 13 Premier League appearances, while he broke the deadlock on the stroke of half-time here with a cool finish from Barkley's perfect pass.

He offers Hodgson and England variety and versatility. He played on the right here, although he was always happy to cut inside to find work.

This adaptability will be a real bonus for Hodgson at the Euros. Walcott offers pace and increasingly reliable finishing - a combination to delight any manager.

The England boss kept faith with many of his tried and trusted players even though his side's place in France next summer is already secured.

It may have been a night to try Jack Butland in goal, but if Joe Hart's 90 minutes was anything to go by, Stoke City's fine young keeper would have been mainly unemployed.

Hodgson also used James Milner in midfield while captain for the night Gary Cahill and forward Sterling are likely starters in France.

The time for experimentation will, Hodgson said afterwards, come in Lithuania on Monday, and it surely makes sense to work through as many options as possible.

Butland will get his chance in goal with Joe Hart not travelling, and Jonjo Shelvey will get another chance in midfield with James Milner also left behind. 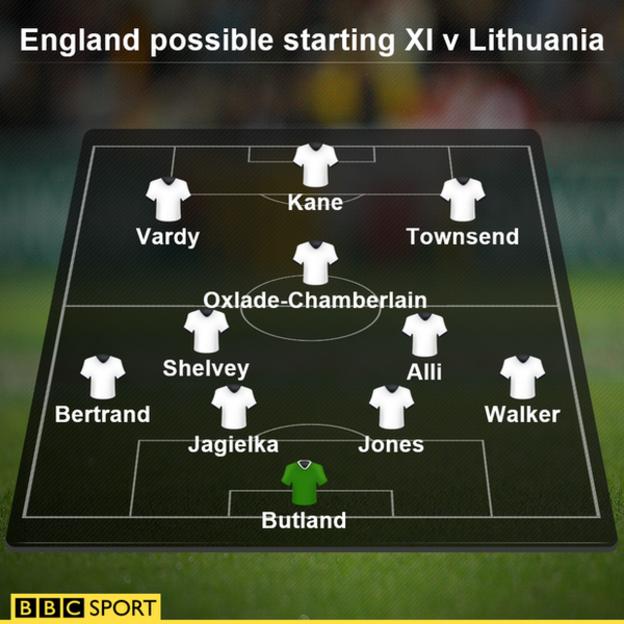 England manager Roy Hodgson: "It was as tough as we thought it would be. Estonia were well organised and they're a team that is intelligent in the way they play.

"We had to work hard, we attacked a lot, we had a lot of the ball and had a lot of chances. I thought we were good value for our 2-0 win."

Former England winger Chris Waddle on Radio 5 live: "England did enough. Estonia were well organised but never looked like scoring. Once England got one you knew it was over.

"There will be people who say it wasn't good enough, but you can only beat what's in front of you. When we get to France we'll see how good we are."

England round off their qualifying campaign with a trip to Lithuania on Monday, 19:45 BST kick-off. They then face friendlies against Spain and France in November and Germany in March of next year.