Holders Spain and Switzerland booked their places at Euro 2016 with comfortable victories on Friday.

However, Manchester City midfielder David Silva and forward Alvaro Morata both came off with injuries.

Spain coach Vicente del Bosque was dealt early setbacks when Silva, with a sprained ankle, and Juventus forward Morata, with a calf injury, came off in the first half of their match.

However, the 2010 World Cup winners, who are bidding to become the first country to win the championship three times in a row, still managed to come away with a comfortable win and qualification.

Arsenal's Cazorla drove in the first and struck home from the edge of the penalty area, while substitute Alcacer scored from passes provided by Chelsea's Cesc Fabregas and Barcelona's Jordi Alba.

"Finally we have managed it," said Cazorla. "We couldn't let our guard down and I think it was a great win."

Behind them it is a battle between Slovakia, who lost 1-0 to Belarus, and Ukraine, who beat Macedonia 2-0, for the second automatic spot. They both have 19 points, with Ukraine hosting Spain and Slovakia, who have the better head-to-head record, at Luxembourg in Monday's final round of games.

In Group G, Russia need a point against Montenegro on Monday to secure qualification, after their 2-1 win against Moldova.

They have 17 points while Sweden have 15 points after their 2-0 win at Liechtenstein. Sweden striker Zlatan Ibrahimovic missed a penalty, but also scored his 58th international goal as the Scandinavian side secured at least a play-off spot. 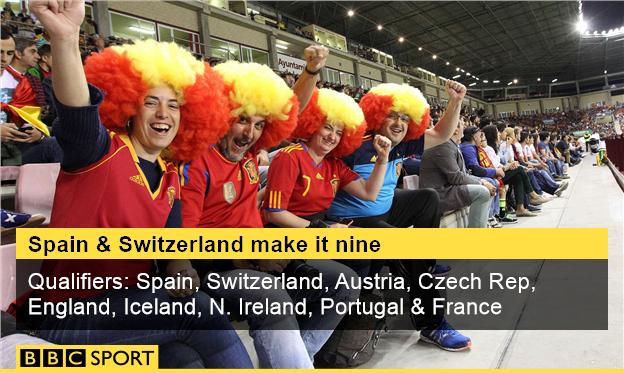