Netherlands are on the verge of missing out on Euro 2016 after Turkey defeated the Czech Republic in Prague.

Selcuk Inan netted a penalty and Hakan Calhanoglu struck a second to give the Turks a priceless victory.

It means they now need just a point in their last group game at home against Iceland to clinch a play-off spot.

Netherlands beat Kazakhstan 2-1 but their fate is out of their own hands, with Czech Republic and Iceland already claiming the top two spots. 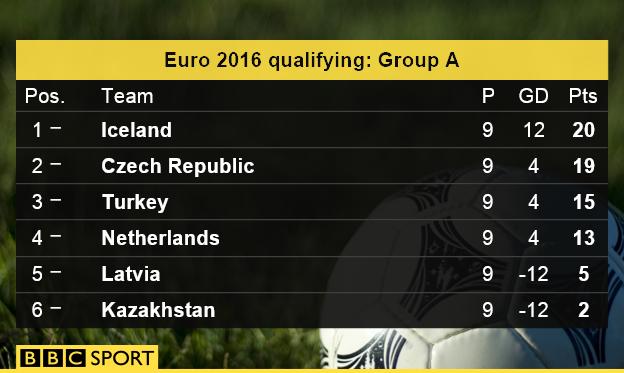 Georginio Wijnaldum and Wesley Sneijder scored either side of half-time before Islambek Kuat added a consolation as Danny Blind's side won their fourth game of the campaign.

The last time the Dutch failed to qualify for a major tournament was the 2002 World Cup.

Before that, they were absent from the 1982 and 1986 tournaments and from the 1984 European Championship. Their final Group A match is against the Czech Republic.

Elsewhere, Iceland were held to a 2-2 draw at home to Latvia, despite having taken a two-goal lead.