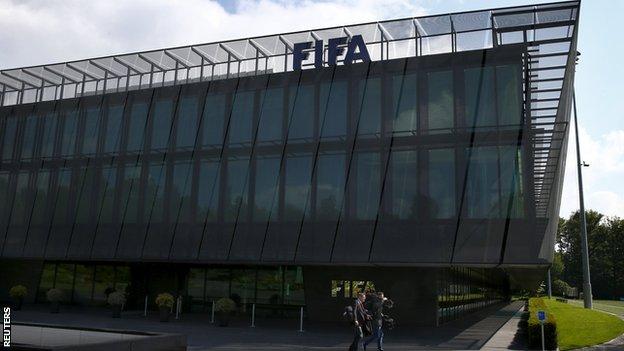 Fifa has hired a consulting firm with links to America's failed bid to secure the 2022 World Cup.

The BBC has learnt New York-based Teneo Holdings has been retained in the wake of the criminal investigation launched into football's world governing body by the US Department of Justice in May.

The company's president is Doug Band, who served as a director on the US 2022 World Cup bid committee.

Band, together with Fifa executive committee member Sunil Gulati and others, made the final World Cup bid presentation to high-ranking officials in Zurich in 2010. He served as a close adviser to President Bill Clinton during his years in the White House.

Band then stayed with Clinton after his presidency ended, helping him establish in 2005 the Clinton Global Initiative, which has raised billions of dollars for worthwhile causes.

Clinton acted as honorary chairman for the US 2022 bid committee and initially served as a senior advisor to Teneo. He stepped down from the position in 2012.

The US made it through to the final round of the 2022 World Cup vote in December 2010, losing out to Qatar.

Teneo is believed to have been hired by Fifa following advice from Quinn Emmanuel, the American law firm working on its behalf.

Teneo describes itself as "a global advisory firm" which "is focused on working with clients to address a wide range of financial, reputational and transformational challenges and opportunities".

It's understood the firm's links with senior politicians and with the US Department of Justice were a motivating factor for Fifa's choice as it seeks to mitigate the legal and financial threats facing it.

The indictment from the DoJ in May led to the arrest and detention of 14 football officials and sports marketing executives on charges of "rampant, systemic, and deep-rooted" corruption following a major inquiry by the Federal Bureau of Investigation.

The DoJ insists its investigations are only just beginning.

Teneo's links with the upper echelons of US politics are well established.

Senator George Mitchell is listed as a senior adviser to the firm.

Mitchell is a former Senate majority leader and was appointed as special envoy to Northern Ireland by Clinton in 1995. In 2009, Hilary Clinton, in her capacity as US Secretary of State, appointed him as US special envoy to the Middle East.

Mitchell is also known for his work in baseball, having led a 2006 investigation into the use of performance-enhancing drugs by players.

Teneo has expertise in handling companies that face investigations and has a specialist sport practice which lists Michael Jordan, Kobe Bryant and LeBron James as clients.

The company recently bought Blue Rubicon - a PR firm that has worked closely with the Qatar 2022 World Cup supreme committee for a number of years.

A Fifa spokesperson told the BBC: "Fifa has retained global advisory firm Teneo to work across operational and reputational priorities."