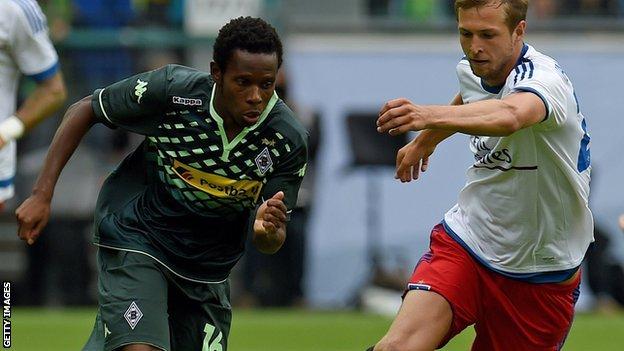 Muslims have spent the past month abstaining from eating and drinking from dawn until sunset.

In the intense summer, that can be a challenge for many - but it can be particularly difficult for top footballers trying to keep in peak physical condition.

Borussia Monchengladbach and Guinea winger Ibrahima Traore is one of those who has been trying to balance playing and training with fasting.

He told BBC World Service's World Football programme he has found it intensely difficult - so hard that on some days he has to break his fast.

"It's not easy - we are training so hard and it is so difficult," he said.

"But when a Muslim does a job that is really difficult, and he has to eat or to drink in order to do his job well, he is allowed not to do Ramadan.

"But with the weather and the training it is not easy at all."

Traore said that the importance of the month for Muslims makes it very difficult for him personally to not fully partake in Ramadan.

However he explained that there are other options for Muslims who are faced with this challenge, such as making a donation to the poor.

And he added that while Monchengladbach's coach Lucian Favre supports his right to choose how Traore observes his religion, he does have concerns.

"He says everybody has to decide for themselves - but as a coach he thinks of my health," Traore explained.

"It's not the fact that he minds that I do Ramadan but he would prefer me not to do it because he says it can be dangerous."

Traore also spoke about his personal view of his religion, and in particular his anger at the actions of Islamist militants.

"We hear a lot about Islamists, but those people are not Muslims - they are not what Islam is about," he said.

"Islam is about faith, and living together. It's a religion where we follow the rules. But I know that I'm a free-minded man, and I'm open.

"I do have fun with people from other religions - my best friend is Jewish. So that can say everything about me.

"It's my religion and I'm really proud of it, but I don't want people to confuse Islam with Islamist (militants)."

This is a big time for Traore and Monchengladbach - they are back in the Champions League group stages having finished third in the Bundesliga last term.

Traore explained that this was the reason he is continuing his break from international duties with the Guinea team.

"For the moment I have made the decision not to go, so that I can concentrate on my club," he said.

"It's a really big commitment. But most people don't know that - they think that it's easy.

"When I started the season with Monchengladbach I was starting every game. But then when I had to go to the qualifiers for the Africa Cup of Nations, I came back too late to training or to the game, I started to play less and less. People don't understand that."