Striker Scott McDonald has signed a one-year deal with Motherwell with the option of a further 12 months.

The 31-year-old spent the second half of last season at Well after being released by Millwall and helped the Steelmen avoid relegation.

"I'm delighted it's been sorted as there had been a bit of speculation," McDonald told Motherwell TV."

Well boss Ian Baraclough said McDonald was a goal threat who would also help to develop the club's other strikers.

McDonald, who won 26 caps for Australia, scored five times in 13 appearances last term in his second spell at Fir Park, having originally played for the club from 2004-07.

He spent nearly three years at Celtic between 2007 and 2010 and was at Middlesbrough from 2010-13 before joining Millwall.

"It's great to have joined and I can't wait until the start of the season," he said. 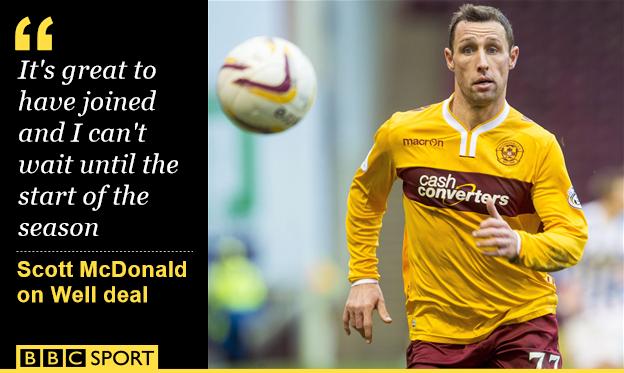 "I have nothing but good memories from my time at Motherwell and the warmth from this football club and what it gives me, and vice-versa, was a big attraction for me coming back.

"I really enjoyed the end of last season and am hoping for some success here this season."

"He carries a threat - that was proven in the last few months of the season - but we also think he can help assist in the development of other strikers at the club too," the manager added.

"Whilst Lee Erwin [now at Leeds United] finished the 2014-15 season fantastically well, it would be remiss to not acknowledge the role Scott played there and that was very much in our mind when setting our strategy for this summer.

"He's also the type of player who will demand from himself and others around him and that's something I see as a huge benefit."