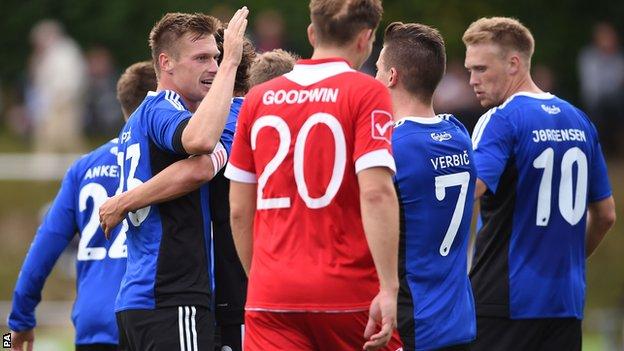 FC Copenhagen were much too strong for Newtown as they progressed to the third qualifying round of the Europa League.

Leading 2-0 from the first leg, the visitors eased further ahead as Marvin Pourie headed in Kasper Kusk's cross, and Nicolai Jorgensen's 40th-minute penalty gave them a 2-0 interval lead.

Pourie's second early in the second half emphasised the gulf in class.

But Tom Goodwin's tap-in for Newtown brought the biggest cheer of the night in spite of the 5-1 aggregate score.

Four years ago Newtown were close to going out of business, but reached the Europa League by winning a play-off with Aberystwyth Town.

A two-leg win over Valletta of Malta earned them a draw with the Danes who played in the group stages of the Champions League in the 2013-14 season.

"To win a first qualifying round tie was a huge achievement for this club.

"And to come up against a team who were playing in the Champions League two years ago and go out there and play the way we did - I think the players acquitted themselves really well."