How would the current England team perform in the Premier League?

The 55-year-old was unable to provide a clear answer: "Would they win it, or finish 10th? I don't know."

But Scudamore suggested England could still compete at major tournaments with a side comprised of players from the bottom half of the top-flight and top half of the Championship.

"We get hung up about how players can't possibly be good enough unless they're playing for Chelsea or Manchester United," he said.

"Of course they can be good enough. How are they going to get into the first teams of Chelsea and Manchester City? Widen your horizons.

"Why shouldn't the England team come from the top 12 teams in the Championship and the bottom 10 teams of the Premier League?"

While the English top-flight revels in its stellar reputation and record television deals, the national team are without a major trophy since winning the World Cup in 1966 and have not reached the semi-finals of the competition since 1990, crashing out at the group stage in Brazil last summer without a win to their name.

With only 35% of last season's Premier League players eligible to play for England, there have been calls to impose a quota on foreign players to aid the growth of homegrown talent, with Football Association chairman Greg Dyke particularly vocal.

"I'd love to see a decent sprinkling of English talent in our top clubs," said Scudamore. "But that is a desire and an aspiration.

"My objective is to put on the best possible show and for our clubs to attract the best players.

"If that means they buy some foreign players, well, they've been doing that since the league began and nothing is going to stop that now."

"Costa Rica played very well in the last World Cup and where were they playing their league football," declared Scudamore.

"We believe in the investment and progress we are making in youth development. You've just got to produce players who are capable of holding their own at the highest level."

If national boss Roy Hodgson were to select a team from the bottom 10 of last season's Premier League teams, this is how it could look: 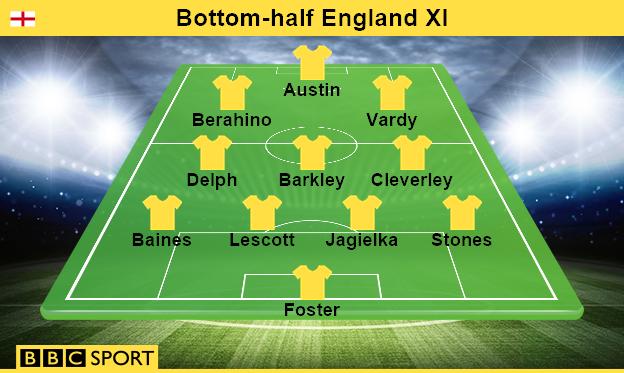 For club and country

The winners of the last three World Cups have been nations hosting three of the top four leagues in Europe. The Premier League is the fourth.

For their respective victories, Italy (2006), Spain (2010) and Germany (2014) all had squads containing a high amount of players from clubs finishing in the top half of their respective top-flights.

Spain had 20 players in their winning squad who played for top-half La Liga clubs (principally Barcelona or Real Madrid), while Italy's squad were all based in Italy, 21 of whom played for clubs who finished the season before in the top 10 of Serie A. 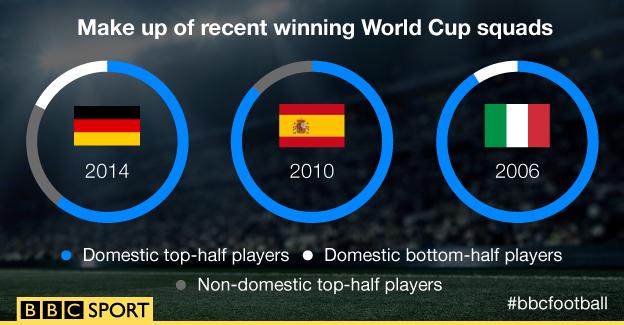