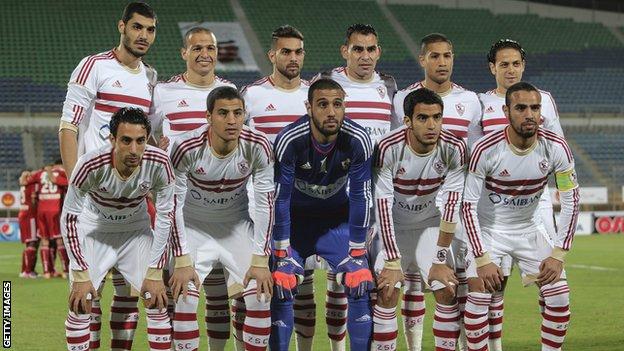 Eight people were arrested on Tuesday evening after attempting to attack the headquarters of Egyptian club Zamalek in Cairo.

The incident happened after Zamalek lost 2-0 to archrivals Al Ahly, in a match played behind closed doors in Alexandria.

They can still win the championship with at least a draw in their final two matches of the season.

The state-run news agency MENA also reported there were limited clashes at headquarters between Ahly and Zamalek fans as security forces intervened and arrested eight of them.

In February 22 fans died in clashes with police at a Cairo stadium.

People were crushed in a stampede after police fired tear gas at supporters of Zamalek who were trying to gain entry to a match against city rivals ENPPI.

Football was initially suspended but restarted after several weeks but fans have not been allowed to attend matches.

Ahly, who have won the last eight league titles that have been completed, won the match thanks to two goals from Moemen Zakareya.

Zamalek manager Jesualdo Ferreira blaming his his players' lack of experience and confidence for the loss.

"Ahly played the game without pressure as their chance to win the league title is minimal.

"Our position in the table put a great pressure on the shoulders of my players, who looked to win the competition tonight.

"Their lack of experience didn't allow them to lift that burden and that's why they appeared in such a poor form. On the other hand, Ahly's players have a great experience that helped them during the game."

"They won the league several times and they gained a great confidence, which is not the case with my players."

Zamalek's final two matches are against El Gaish, who are currently ninth, next week and then Wadi Degla, who are fifth on 3 August.