With the return of the Football League almost upon us, 72 managers up and down the land are sure to be spending next weekend prowling technical areas, gesticulating angrily and barking instructions at their players.

They might groan at every misplaced pass, wayward shot and missed tackle, but we wondered whether the gaffers themselves would have done any better in their playing days.

So from the 72 candidates, we have compiled what we think is the ultimate Football League Managers XI - and it is a pretty useful line-up.

With 312 international caps, four Champions League trophies, three Premier League winners' medals, eight Scottish Premiership titles and a Turkish Cup between them, it is clear the men on the Football League touchlines this weekend had plenty of quality in their day.

This is how our Football League Managers XI lines up... 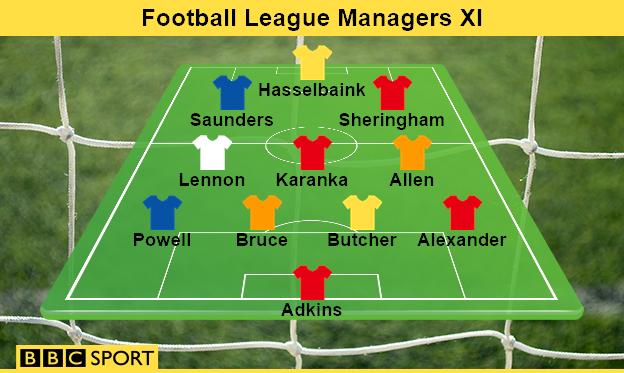 The cynics among you may well argue that Nigel Adkins, who took over as Sheffield United boss in June, is our number one simply because he is currently the only ex-professional keeper managing in the Football League.

But the 50-year-old had a perfectly respectable playing career, making more than 150 appearances in goal for Wigan Athletic.

After hanging up his gloves, Adkins graduated from club physiotherapist to first-team manager during his time at Scunthorpe United, with whom he won promotion from the third tier in 2007.

Having become only the second player to reach 1,000 competitive outfield appearances in English professional football in 2011, Graham Alexander would be a hard man to leave out.

Now manager of League One side Fleetwood Town, Alexander took in the sights of Scunthorpe, Luton, Preston and Burnley during a playing career that spanned 22 years.

The former Scotland international was also a bit of a spot-kick specialist, so he can be on penalty duties.

Chris Powell was the epitome of a good, solid Premier League professional with Derby County and Charlton Athletic - but it is not for his club exploits that he is best remembered as a player.

Two months after replacing Kevin Keegan as England manager, Sven Goran Eriksson surprisingly named 31-year-old Powell in his first squad. The left-back became the oldest England debutant since 1954 when he started against Spain.

That was to be the first of five caps for Powell, who now manages Huddersfield Town.

But, even though the 54-year-old was overlooked by England managers Bobby Robson, Graham Taylor and Terry Venables, the former centre-back gets our vote.

Bruce, promoted to the Premier League as a manager with both Birmingham and Hull, will be hoping to repeat that feat having dropped back down to the Championship with the Tigers in May.

Our Football League Managers XI is packed with potential captains, as you would expect for a team of bosses, but one man surely stands head and shoulders above the rest from his playing days.

Terry Butcher - now in charge of League Two side Newport County - represented England 77 times, led his country to a World Cup semi-final and was long considered a patriotic stalwart of English football.

It is true that he has not yet quite matched that success as a manager in the English leagues - although he has managed effectively in Scotland - but for that epic performance against Sweden alone he deserves to wear the armband for us.

Despite featuring primarily in defence throughout his career, we figured that Aitor Karanka should be more than capable of making the transition to midfield. After all, he played for Real Madrid, Athletic Bilbao and Spain.

The Middlesbrough boss won three Champions League trophies and one La Liga title during his five years at the Bernabeu, earning his one and only international cap in 1995.

The 41-year-old may have been denied promotion to the Premier League in May, losing last season's Championship play-off final, but there is no doubting Karanka's credentials.

Speaking of winners, Neil Lennon can certainly consider himself one of those.

The former Northern Ireland international bagged five Scottish Premierships, four Scottish Cups and two Scottish League Cups as a player with Celtic, and that is not to mention the two League Cups he lifted with Leicester City too.

The 44-year-old, heading into his first full season in charge of Bolton Wanderers, was well known for his all-action combative style and makes up the middle third of our midfield trio.

"Mad Dog", as he is affectionately known, built a reputation as a tough-tackling midfielder during a playing career that saw him make more than 100 appearances for Queens Park Rangers and then represent West Ham United in the Premier League.

The 49-year-old, who famously took dips in the River Tees and River Solent during Brentford's run to the FA Cup fifth round in 2005, is back in the Football League this season after guiding Barnet to the Conference title in April.

While our back four and midfield three are mostly about hard work, guts and determination, our strike force just oozes international class.

During his playing career, Chesterfield boss Dean Saunders found the net 255 times for clubs including Derby County, Liverpool, Aston Villa and Galatasaray (that is where the Turkish Cup came from, for those wondering), and ranks fourth on Wales' list of all-time international goalscorers.

It has not been quite so straightforward for Saunders in the managerial hot seat, though, having endured three relegations in four seasons while in charge of Doncaster, Wolves and Crawley.

Teddy Sheringham's appointment as Stevenage manager in May seemed to be pretty well received by football fans in this country - and particularly so in our office, as our side was crying out for someone to play in the number 10 role.

He also picked up the Premier League Golden Boot in 1993 and was the PFA Player's Player of the Year in 2001.

Having landed the job at the Lamex Stadium, he said: "I'm learning every day". The former England striker had better learn quickly if Boro are to launch another League Two promotion challenge in 2015-16.

Sheringham would be delighted to follow the lead of his Football League Managers XI strike partner Jimmy Floyd Hasselbaink, who took Burton Albion up from the fourth tier for the first time last season.

The 43-year-old scored nine goals in 23 appearances for the Netherlands and, like Sheringham, won the Premier League Golden Boot during prolific spells with Leeds United and Chelsea.

With more than 500 goals in the English leagues between them, Hasselbaink completes a potent front three.

We need a manager to manage these managers - and who better to lead our team of stars than the only current Football League boss to have managed at a World Cup?

Mick McCarthy, who took the Republic of Ireland to the last 16 of the 2002 tournament, has twice secured promotion from English football's second tier, winning the Championship title with both Sunderland and Wolves.

But will one of British football's great characters be able to handle all the egos and personalities in our Football League Managers XI?