The home nations will find out who they will face when the qualifying draw for the 2018 World Cup takes place on Saturday in St Petersburg, Russia.

England, Wales, Scotland and Northern Ireland are among 141 nations who will be in the draw.

European sides will be placed into nine groups - seven with six teams and two of five sides - with Roy Hodgson's side knowing they will be in a pool of six.

How does the European draw work?

Russia have already qualified as hosts, and the other 52 member nations have been split into six pots based on Fifa's July rankings. Gibraltar are not involved as they are not a member of Fifa, despite being a Uefa member.

The nine top seeds in Europe - including Wales and England - will first be drawn into a group. For TV rights purposes, England, Germany, Spain and the Netherlands will be drawn into groups of six teams, as will Italy and France from pot two. 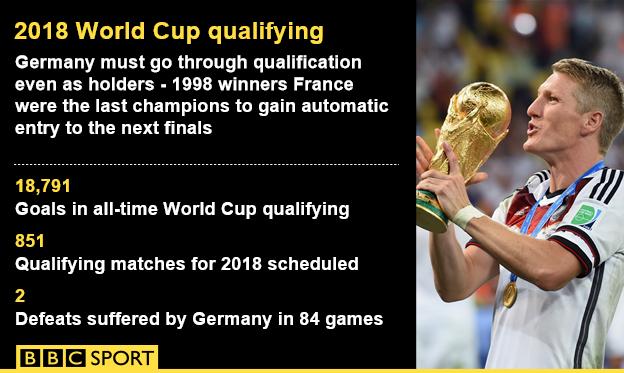 A team from each of the other four or five pots will then be drawn into each group to make up the nine groups. Games will be played from September 2016 to October 2017.

The nine group winners will progress to the finals, while the eight best runners-up will take part in play-offs in November 2017.

The Fifa confederations of Africa, Oceania, South America and Concacaf (North, Central America and the Caribbean) will also be involved.

Germany are the holders of the World Cup after a 1-0 extra-time victory over Argentina in Brazil in 2014.

Fifa has announced that former Chelsea midfielder and Russia captain Alexey Smertin will replace Brazilian striker Hulk as a draw assistant "due to the Brazilian's club commitments" with Zenit St Petersburg.

Earlier this week Hulk said racism happens at "almost every game" in the Russian league.

Read in full about the qualifying format

What are the best - and worst - scenarios for the home nations?

As top seeds, England and Wales have guaranteed avoiding the other top sides in Europe. Theoretically.

However, from pot two they could still face Italy (currently ranked 17 in the world) or France (ranked 22), while trips to the likes of Sweden, Poland or Ukraine could prove tricky.

Wales, Northern Ireland and Scotland could be drawn into a group of five teams instead of six - which may help their chances.