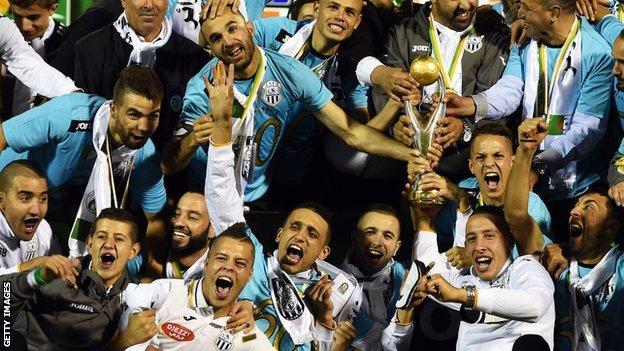 Holders Entente Setif of Algeria are still looking for their first home win of the African Champions League group phase in almost five years after El Merreikh of Sudan held them to a 1-1 draw in their Group B match on Saturday.

Setif have not won a Champions League group stage fixture on home soil since 27 August 2010 when they beat Dynamos of Zimbabwe 3-0.

In the defence of their title this year, they lost 2-1 to compatriots USM Alger in their first match before Saturday's 1-1 draw with Merreikh.

Setif are tied on four points in Group B with Merreikh, five points behind leaders, USM Alger.

On Friday, USM moved closer to the semi-finals by edging fellow Algerians El Eulma 2-1 in Algiers .

Leaders USM have a perfect Group B record with nine points from three matches while pointless Eulma remain last.

Egyptian Ayman El Sayed was red-carded three minutes from time for Smouha, after a dive resulted in a second caution.

The resulted lifted four-time African champions Mazembe from third place to sit at the summit of Group A overnight but Sudanese giants Al Hilal regained the position after they snatched a late 1-1 draw against Moroccans Moghreb Tetouan on Sunday.

Brazilian-import Andre Rocha Da Silva curled home a spectacular free-kick seven minutes after captain Abdeladim Khadrouf had headed the hosts into the lead midway through the second half.

The equaliser denied the Moroccans their first ever win at the mini-league, leaving them bottom of the table with two points, trailing Hilal and TP Mazembe (who both have five points) by three points. Debutants Smouha of Egypt have three points.

Group winners and runners-up advance to the semi-finals.