Paris St-Germain expect winger Angel Di Maria, 27, to leave the North America tour next weekend as their player, having flown to the continent with Manchester United. (Mirror)

PSG's 33-year-old striker Zlatan Ibrahimovic has raised the possibility of a move to Old Trafford, despite admitting he does not have a good relationship with manager Louis van Gaal. (Daily Mail via Sports Illustrated)

Real Madrid seem to have indicated an end to their chase of Red Devils keeper David De Gea, 24 as boss Rafa Benitez said Keylor Navas would be a regular starter this season. (Goal.com)

Manchester City striker Sergio Aguero, 27, is facing a battle to be fit for his side's opening Premier League match against West Brom on 11 August. Aguero played in the final of the Copa America as Argentina lost to Chile. (Daily Star)

City will step up the pursuit of £60m-rated Belgian midfielder Kevin De Bruyne, 24, when he arrives in England with Wolfsburg to play in the Emirates Cup. (Manchester Evening News)

Gunners midfielder Aaron Ramsey, 24, says he is "flattered" to be linked with a move to Barcelona, with reports they could make a £50m for the Welshman in the future. (Guardian)

Former Chelsea striker Didier Drogba, 37, has been offered just under £650,000 by Atletico de Kolkata to compete in the Indian Super League for four months. (Evening Standard)

Chelsea midfielder John Mikel Obi, 28, has no intention of leaving Stamford Bridge and is happy to see out the remaining two years of his contract with the Blues. (Talksport)

Aston Villa have opened talks with Lorient striker Jordan Ayew, 27, who is due in Birmingham ahead of a £9m deal. (Mirror)

Southampton are interested in signing £10m-rated Hull defender James Chester, 26, after their Romanian centre-back Florin Gardos was ruled out until February. (Mirror)

West Ham midfielder Kevin Nolan, 33, says he will consider leaving the Hammers if he does not get enough playing time under new manager Slaven Bilic. (Express)

Crystal Palace chairman Steve Parish says striker Dwight Gayle, 24, will not be sold by the club this summer. (Croydon Advertiser via Talksport)

Striker Jonathan Kodjia, who was signed for £2m from Angers, is set to make his Bristol City debut against SC Almancilense on Saturday. (Western Daily Press)

Two Celtic teams will effectively be fielded by Ronny Deila in Saturday's friendly against Rennes as he juggles game-time for his players ahead of Wednesday's Champions League qualifier at home to Azerbaijan champions Qarabag. (The Scotsman)

Stoke forward Bojan is set to make his return from the cruciate knee ligament injury he suffered in January in Saturday's pre-season friendly at Brentford. (Stoke Sentinel)

As he spends time away from the training ground recovering from injury, West Ham striker Andy Carroll has decided to take up modelling, posting a picture on the catwalk on his Instagram account. 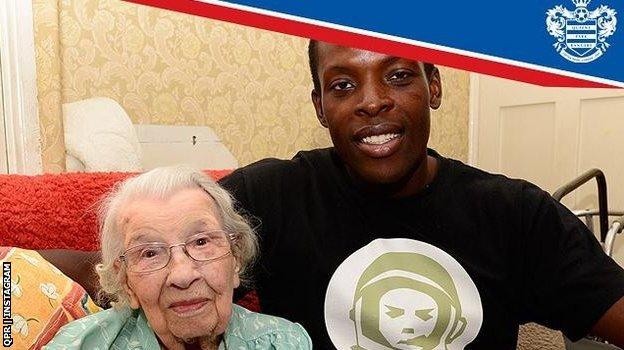 Defender Nedum Onuoha paid a surprise visit to Edith Scott - a QPR fan who celebrated her 100th birthday this week. The club posted a picture on their Instagram account.

Outgoing Fifa president Sepp Blatter says he wants a job in local radio when he steps down as chief of football and has been offered a work placement at a local radio station in England. (Radio Yorkshire)