FA Cup holders Arsenal won the Community Shield for a second season in a row as they beat Premier League champions Chelsea at Wembley.

Alex Oxlade-Chamberlain scored the winner with a powerful drive into the top corner with his weaker left foot.

Ramires headed wide unmarked from Loic Remy's cross as Chelsea failed to hit the target before the break.

Eden Hazard skied a chance over the bar before Oscar's free-kick was parried wide by Arsenal debutant Petr Cech.

It was the first time the former Chelsea goalkeeper had been called into action - after 68 minutes of play - and soon after he comfortably held on to Kurt Zouma's header.

Arsenal went close late on through Santi Cazorla and Kieran Gibbs in a match where both sides looked rusty a week before their Premier League opener.

Wenger finally beats the 'Special One'

Arsenal boss Arsene Wenger finally had reason to celebrate against Jose Mourinho's Chelsea having failed to win in any of his previous 13 attempts.

In February 2014 the Chelsea boss called his opposite number a "specialist in failure", and then in October the Gunners boss shoved his rival during a heated touchline quarrel.

Oxlade-Chamberlain's stunning strike was Arsenal's first goal against Chelsea for 506 minutes, as the Gunners ended the Blues' eight-match unbeaten run against them.

Chelsea though can argue they are a week behind Arsenal in terms of preparation, with Italian side Fiorentina visiting Stamford Bridge in their final pre-season match in midweek.

Who is ready for the Premier League? 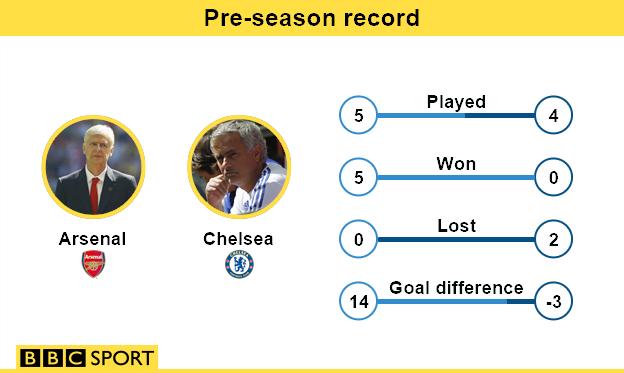 Arsenal ended last season with 20 wins from 27 matches in all competitions, a win ratio of 74% compared to Chelsea's 58%, and continued where they left off on Sunday.

The Gunners, who have already won two pre-season tournaments, have only added goalkeeper Petr Cech to their ranks this summer but his calm defensive presence will boost hopes of ending their 11-year wait for the title.

Both sides struggled to create a lot going forward at Wembley, although Olivier Giroud's introduction for Theo Walcott in attack after the break saw Arsenal look more of a threat offensively.

Chelsea, without last season's top scorer Diego Costa due to injury, were also toothless before the break with Loic Remy not threatening as the lone striker.

Last season's Premier League champions have not won a match in pre-season but will believe second-half substitute Radamel Falcao, making his debut, and Costa will improve their attacking threat.

Arsenal boss Arsene Wenger, speaking to BT Sport: "We have suffered physically today and the pitch was not great.

"But overall it's good because in pre-season we have been solid defensively. Pre-season has gone quite well.

"We have no big injuries at the moment apart from Jack Wilshere who we lost yesterday."

Gunners midfielder Alex Oxlade-Chamberlain, on BBC Radio 5 live: "It's really nice to come to Wembley and win. We wanted to keep our good streak here going. We are delighted to win another trophy and for me personally, I'm happy I got the winner.

"I don't actually think I've lost at Wembley. Long may it continue. Today was a big game for us and we wanted to lay down a marker for our manager and our fans. I want to contribute more goals this season, it's a target I've set for myself, and of course I'm happy to have got the goal today."

Chelsea manager Jose Mourinho on BT Sport: "We were the best team. We had more initiative, we controlled the game by having ball possession. Arsenal defended with 10 players, they put everybody in front of their own line and they had good organisation, congratulations to them.

"They had a couple of chances in counter attacks but we had ours in organised football. They played their game tactically and found themselves one goal in front without any reason.

"This season the Premier League title is very difficult but it is very difficult for everyone. The way other teams are spending they have big power in the hands while we are the same as last season. And with that we are going to try."

'The end of the hoodoo'

Pat Nevin, ex-Scotland international on BBC Radio 5 live: "It was a hard-fought match. It certainly meant a lot to the players, as to what it will mean over the season, time will tell, but Arsenal and Arsene Wenger have finally broken their Jose Mourinho hoodoo.

"Psychologically, you need to win trophies. For a long time Arsenal did not win enough. But now they are used to victories at Wembley. There was very little between the two teams but in the end, Arsenal won it 1-0. That's not a scoreline you would have thought of a while ago."