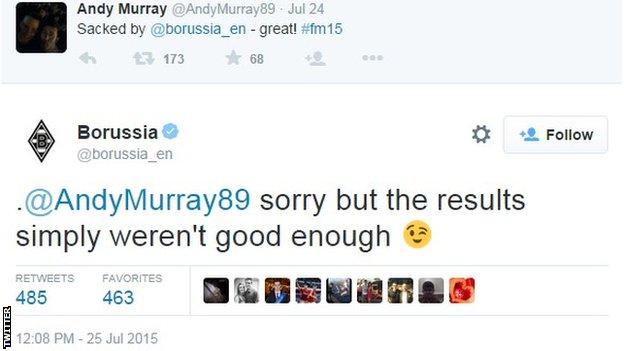 Anybody who has played a football management simulation game has experienced its fickleness.

You take an unfashionable club to domestic and European glory, have a few dodgy results and then the dreaded 'you're sacked' screen pops up.

Days, weeks, even months of hard work gone in the click of a mouse.

One player of Football Manager, called Andy Murray, decided to tweet German team Borussia Monchengladbach after being sacked in the virtual world.

What happened next surely surprised him - the club tweeted him back with the humorous response that read "results simply weren't good enough".

It will surely have raised a smile from Andy as he starts the arduous task of finding a new club...