Chelsea will make a £26m bid for Everton defender John Stones, 21, within the next 48 hours, but the Toffees want £34m. (Daily Mirror)

Real Madrid have rejected a formal offer of £84m from Paris St-Germain for 30-year-old forward Cristiano Ronaldo, according to several Middle Eastern newspapers. (AS) 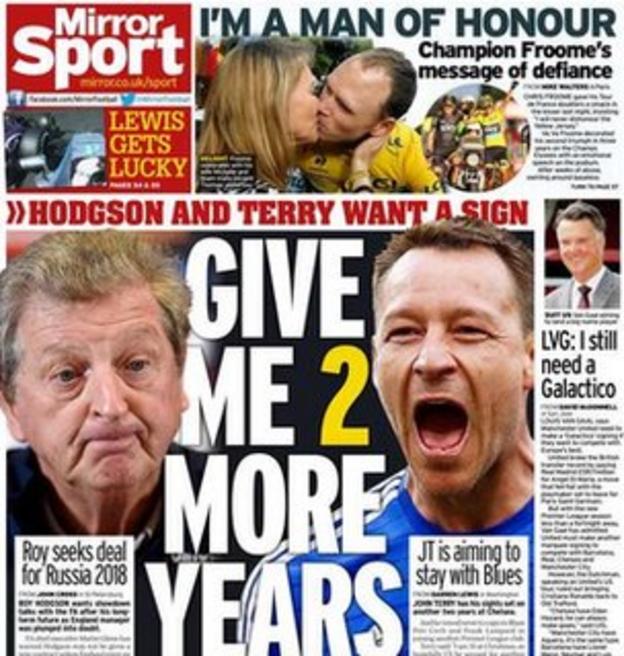 Paris St-Germain striker Zlatan Ibrahimovic, 33, has played down the quotes which had seen him linked to Manchester United. (Evening Standard)

Fabricio Coloccini is yet to play a single minute for Newcastle United in pre-season - raising rumours that the 33-year-old defender is ready to quit St James' Park. (Newcastle Chronicle)

Gunners boss Arsene Wenger is ready to make an increased bid for Real Madrid striker Karim Benzema after an initial offer of £31m was rejected for the 27-year-old. (Daily Telegraph via Fichajes)

Juventus want to take Chelsea winger Juan Cuadrado, 27, on loan, but the Blues would rather sell him and would accept £18m, £5m less than they paid for him six months ago. (Sun - subscription only)

Montreal Impact have acquired the MLS rights to former Chelsea striker Didier Drogba, 37, from Chicago Fire and are poised to sign the Ivorian. (ESPN FC) 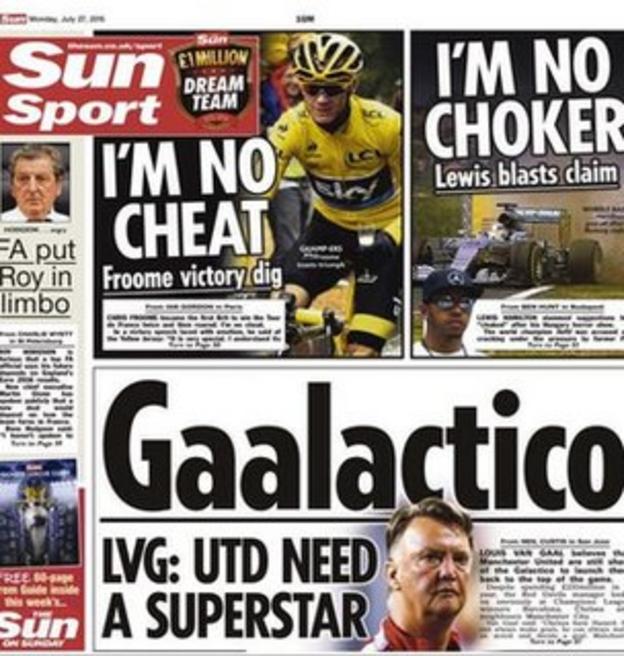 Chelsea manager Jose Mourinho, 52, is open to the possibility of playing Premier League matches in the USA after being impressed by the crowds during their pre-season tour. (Evening Standard)

And the Portuguese has taken a dig at Chelsea's Premier League rivals Manchester United and Liverpool, saying they are trying to "buy the title". (Independent)

Wales manager Chris Coleman believes his compatriot Gareth Bale, 26, will stay at Real Madrid despite reports linking him with a move to Manchester United. (Guardian)

Hull defender James Chester, 26, is wanted by Crystal Palace, Leicester, Southampton, Newcastle, West Brom and Aston Villa with the Tigers hoping to raise £8m from his sale. (Sun - subscription only)

England manager Roy Hodgson is unhappy with the FA's decision to review his position after Euro 2016 rather than extend his contract up until Russia 2018 now. (Daily Telegraph)

PFA boss Gordon Taylor, 70, is set to get a £2m-a-year pay rise which will see him earn more than the average Premier League footballer. (Daily Mail)

Borussia Dortmund have approached Tottenham with a view to signing striker Roberto Soldado, 30, who reportedly wants to leave the north London club. (AS via Sportmediaset)

Sunderland striker Steven Fletcher could move to Swansea for £4m. The 28-year-old has only 12 months remaining on his current contract at the Stadium of Light. (Sunderland Echo)

Arsenal goalkeeper Wojciech Szczesny announced via Instagram that he will be joining Roma on Monday. The Pole recorded a video in the back of a car and took time to learn his presentation speech in Italian.

The letter former Liverpool boss Bill Shankly wrote to tender his resignation as Liverpool manager in 1974 has been posted on Twitter by ex-Liverpool striker John Aldridge. He tweeted: "This is Shanks' last letter before his resignation was accepted. Liverpool FC's greatest employee. Still adore Shanks."

Arsenal fan and Ryder Cup hero Ian Poulter took time away from the golf course to spend a father-son day at the Emirates Stadium. "Great day at Arsenal," posted the English golfer on Twitter. "Even had a catch up with Mr Wenger and Jack Wilshere. Luke is so happy. Buzzing."

Manchester City forward Stevan Jovetic, 25, tweeted a picture of himself en route to Milan for a medical ahead of a prospective move to Inter Milan.

Meanwhile QPR striker Charlie Austin has laughed off claims that his wage demands are holding up a move away from the club, posting a picture of Mr Men character Mr Greedy on his Twitter feed.

QPR midfielder Leroy Fer and his new wife set a high dancefloor standard for their wedding guests as they launched into a slick synchronised routine for their first dance. (Twitter)

Manchester City's friendly against Vietnam in Hanoi has attracted criticism with some tickets costing £50. It is estimated that it would cost the average worker two weeks' wages to attend. (Independent)