Wales have made the 33,000-capacity venue a daunting place for opposing teams in their bid to reach Euro 2016, topping Group B by three points.

Cardiff City Stadium is now regularly sold out but Coleman does not think they should be tempted to switch back to the 74,000-seat Millennium Stadium.

"The opposition don't like going there because everything's on top of them."

Wales have four games remaining in their bid to reach the Euro 2016 finals in France, two at home to Israel and Andorra with trips to play Cyprus and Bosnia-Hercegovina.

A win away to Cyprus on 3 September and then in Cardiff against Israel three days later could be enough to seal Wales' place at a major finals for the first time since 1958. 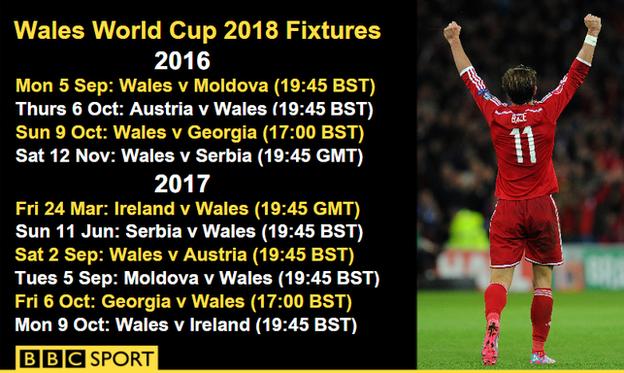 Wales were one of the top seeds in Saturday's draw for 2018 World Cup qualifying, being placed in Group D alongside Austria, Serbia, Republic of Ireland, Moldova and Georgia.

The home game against Republic of Ireland on 9 October 2017, in particular, would be likely to sell out Cardiff City Stadium twice over if the current popularity of Coleman's side continues.

But the manager was firm that he would resist any calls to move away from the atmosphere Wales have created at Cardiff City Stadium.

"As far as I'm concerned, what do we want to do? We want to qualify for the World Cup," he said.

"The opposition will want to play at the Millennium Stadium, it's a magnificent stadium.

"Where the opposition don't want to play is Cardiff City Stadium, they know that's where we're at our strongest.

"So if we want to qualify we've got to take care of business on the pitch, we've got to give our players the best opportunity.

"We've got to make them feel good about themselves; they feel good playing at Cardiff City.

"We've created an atmosphere there and we need to hang onto that, we've got to work on it and we've got to continue to give the Welsh public something to shout about."