Everton manager Roberto Martinez has insisted defender John Stones will not be sold to Chelsea.

The Premier League champions are expected to return with a third bid for the 21-year-old England international after a failed £26m offer.

Martinez was critical of Chelsea after a first £20m bid was made public.

And when asked about another possible approach for Stones on Thursday, Martinez said: "The player is not for sale and that is the end of it."

He added: "Our situation has been very clear from the beginning. We are not a selling club who will lose our best performers."

He was bought for £3m from Barnsley in 2013 and has since been capped four times by his country.

Teenager Mason Holgate has followed the same path after joining Everton from the League One side on Thursday for an undisclosed fee.

However, Martinez denied Holgate, 18, was being signed as a replacement for Stones: "He will be a phenomenal young prospect coming into that golden generation we feel we have at the club and he will be a good one for the future."

Meanwhile, the Toffees are set to find out on Thursday how long England left-back Leighton Baines could be out for after injuring an ankle which was only operated on at the end of last season.

"We will get the results of the scan and we will get a clear idea of the problem," Martinez said. 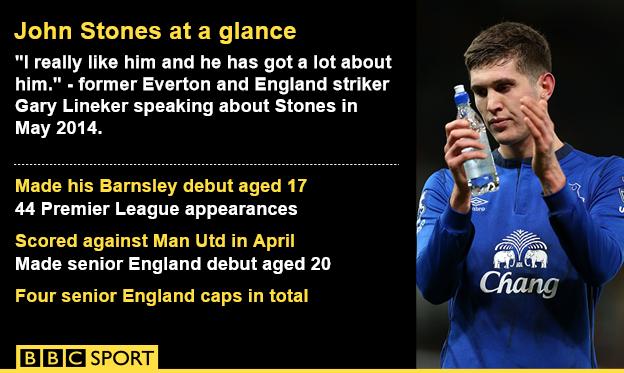