The season is fast approaching and your squad needs bolstering, but you've got a tight budget and you need a bargain.

What do you do?

Go in search of the best available free transfers, of course. Here, we pick out some of the players available for nothing this summer.

Alberto Aquilani is unlikely to be remembered fondly on Merseyside. Signed by Liverpool for £17m in 2009, he made only 18 Premier League appearances for the club before joining Juventus and AC Milan on loan and then Fiorentina permanently in 2012.

The Italy international made 81 league appearances in three seasons for La Viola, but is now out of contract and looking for a new club. He has been linked with a move to Major League Soccer side Montreal Impact.

Did you know? Despite playing only 815 minutes of Premier League football, Aquilani provided six assists and scored one goal.

With more than 250 Premier League appearances for Manchester City, Newcastle and QPR, Barton offers plenty of experience for a prospective club.

Released by QPR following their relegation from the Premier League, Barton made more passes and created more chances than any other QPR player in the league last season. However, his combative nature can get him into trouble, with his sending off against Hull in February the ninth red card of his career.

Did you know? Barton became the first player in Premier League history to be booked in seven successive appearances last season.

A highly rated graduate of Barcelona's La Masia academy, a former Spain Under-21 international and an underwhelming loan spell at Ajax… Cuenca's career so far has followed a similar - albeit less successful - path to that of Stoke forward Bojan.

Given his debut by Pep Guardiola in 2011, a series of injuries saw him leave the Nou Camp last summer to join Deportivo La Coruna and he now finds himself without a club.

Did you know? Cuenca started alongside Lionel Messi and Alexis Sanchez in Barcelona's 2-2 Champions League semi-final draw against Chelsea at the Nou Camp in April 2012.

Once described as 'the new Zinedine Zidane', Gourcuff is available on a free after his contract at Lyon expired in June. A Champions League winner with AC Milan in 2007, the French playmaker joined Lyon from Bordeaux for £20m in 2010, but a succession of injuries meant the France international made only 90 league appearances for the club in five years, scoring 14 goals and providing 17 assists. Arsenal and Liverpool have both been linked with a move.

Did you know? After his move to Lyon in 2010, Gourcuff was described by former Newcastle and Tottenham midfielder David Ginola as "probably the most talented [French] player of his generation".

Signed by Southampton for a club-record £15m two years ago, Osvaldo had his contract terminated by the club this summer. A training-ground fight with Jose Fonte in January 2014 is one of a number of incidents in which the controversial Italy international has fallen out with his team-mates, but the talent is there: he scored 16 goals for Roma in Serie A in his last full season at a club in 2012-13 and managed to score five goals in just 573 minutes of league football for Inter last season.

Did you know? Osvaldo has played for 11 clubs in the last 10 years, including four in the last two seasons.

After turning down a new contract at Wolves and offers from abroad, Sako has his sights set firmly on playing in the Premier League. The Mali international scored 36 goals and provided 32 assists in 118 league appearances for Wolves, with the 15 goals and seven assists he achieved last season earning him a place in the PFA Championship Team of the Year. Aston Villa, Bournemouth, Everton and Leicester are all reportedly interested in the winger.

Did you know? Sako completed more dribbles than any other player in the Championship last season (116).

Having not played for the club in over a year, left-back Taiwo had his contract at Turkish side Bursaspor ended by mutual consent in April. A league and cup winner during a successful six-year spell at Marseille from 2005 to 2011, the Nigeria international already has experience of playing in the Premier League as he was Mark Hughes's first signing at QPR in 2012, making 15 appearances on loan from AC Milan to help the club avoid relegation.

Did you know? Taiwo was voted the third-best player at the Fifa World Youth Championship in 2005, behind Barcelona forward Lionel Messi and Chelsea midfielder John Mikel Obi.

Out of contract after three seasons at Villa Park, the Netherlands centre-back gained many admirers after an impressive performance for his country at last summer's World Cup.

But after making only 20 Premier League appearances last season because of injury, concerns over the player's fitness have proven well-founded, as he was ruled out for four months with a knee injury a few weeks ago.

Linked to both Lazio and Southampton, clubs may wait for Vlaar to regain fitness before offering him a contract.

Did you know? Aston Villa won 29% of their Premier League games with Vlaar in the side, compared to only 20% without him.

After spending 15 years at his hometown club, academy product Wilkinson was released by Stoke in May. With over 100 Premier League appearances, a promotion from the Championship in 2008 and an FA Cup final appearance in 2011 under his belt, the right-back offers experience for clubs in the Premier League and Football League alike.

The Potters then re-signed him on a week-to-week deal to enable him to recover from injury, before turning that into a six-month deal on 29 July.

That, by the way, came just a few hours after this article was published. Any link between the two is, of course, purely coincidental...

Did you know? Wilkinson made 194 appearances for the Potters, his debut coming in a Football League Trophy game at Blackpool in October 2001.

It looks like Wilkinson is one of the lucky ones.

As of midnight on Wednesday, 29 July the others listed above are still available on a free transfer.

Will anyone help themselves to a bargain?

And some of the best free transfers from previous seasons 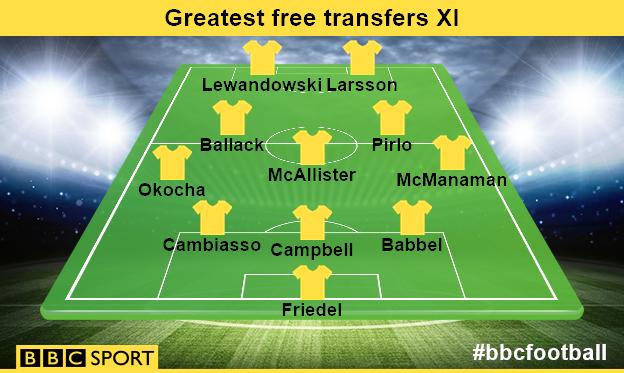