Michel Platini has been criticised by two potential Fifa presidential rivals, hours after confirming he will stand for world football's top job.

Platini announced on Wednesday that he wants to succeed Sepp Blatter when elections take place on 26 February.

The Uefa president, 60, says Fifa needs to "turn over a new leaf" after being dogged by corruption allegations.

However, Prince Ali Bin al-Hussein and Musa Bility claim Platini would be a bad choice as a successor.

Prince Ali, who stood against Blatter in the last presidential election, said that "football's fans and players deserve better".

A member of the Jordanian royal family, he added that Fifa needed a "new, independent leadership, untainted by the practices of the past".

In an interview with the BBC's World Football programme, he added that the Frenchman "doesn't represent the change that we all want".

Scottish Football Association chief executive Stewart Regan is among his backers, insisting he had done a "fantastic job" at Uefa.

"He's developed the financial revenue streams for football and has led the way, led from the top," Regan told the BBC's World Service.

"He's allowed every national association to have a voice. He consults and engages with chief executives and presidents... that's been a breath of fresh air. He listens and he's very innovative and creative."

Platini, a former France international, said he had decided to stand after weighing up "the future of football alongside my own future".

Swiss Blatter, 79, has been in charge of Fifa since 1998. Candidates have until 26 October to be nominated.

Why is Platini standing?

In a letter sent to the presidents and general secretaries of the 209 member associations of Fifa, Platini pledged he would work tirelessly "in the interests of football".

He added: "There are times in life when you have to take your destiny into your own hands.

"I am at one of those decisive moments, at a juncture in my life and in events that are shaping the future of Fifa.

"During this last half-century or so, Fifa has only had two presidents. This extreme stability is something of a paradox in a world that has experienced radical upheavals and in a sport that has undergone considerable economic change.

"However, recent events force the supreme governing body of world football to turn over a new leaf and rethink its governance."

"I have brought Europe together on a unifying path," he said. "I gave all the national associations - big and small - the place they deserved.

"Now, I aspire to do the same at world level, to offer all national associations a common cause." 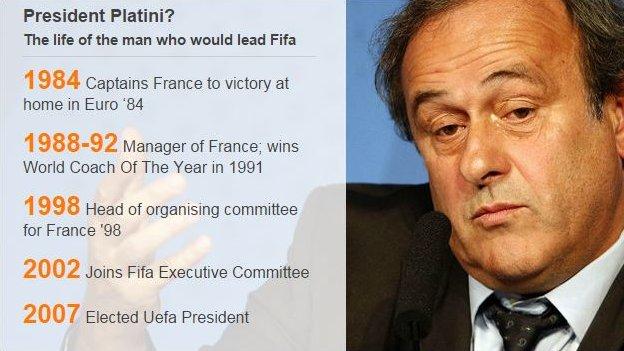 As a player, Platini won three Ballon d'Or titles in the mid 1980s as well as a European Cup, Cup Winners' Cup and Super Cup with Juventus.

The former Nancy and Saint-Etienne midfielder, famous for his ability to score from free-kicks, also won league titles in France and Italy.

He also helped France to European Championship success in 1984 and third place at the 1986 World Cup.

He was elected Uefa president for a third term in March.

"Platini can fairly lay claim to being 'a football man', his status as a genuine great former player a rarity in Fifa's corridors of power, earning him respect and admiration," says Roan.

"As Uefa president, he has also gained credit for increasing diversity in the Champions League by making it easier for clubs from smaller countries to qualify, and at least trying to curb over-spending through his albeit controversial Financial Fair Play reforms.

"However, he has been accused of tarnishing the qualification process for the European Championships by meddling with the competition to increase it to 24 teams.

"He has also been criticised for his pan-European vision for Euro 2020, while his stubborn opposition to goal-line technology also makes it hard for him to present himself as a reform candidate.

"Most importantly, despite his recent opposition to Blatter, he is associated with the outgoing president's regime.

"Not only was he a Blatter protege, he has been on Fifa's tainted executive committee since 2002.

"Most damagingly, he has admitted to having 'no regrets' for voting for Qatar to host the World Cup in 2022, a decision which, for many, is symbolic of Fifa's malaise.

"Platini has at least been open about his choice of Qatar, unlike most Fifa officials, but the fact his son has been employed by a Qatari-owned sports kit manufacturer does him no favours, no matter how much he denies this had any influence over his decision."

"With four of the six global football confederations telling Platini they would support his candidacy, he will be very difficult to defeat," he says.

"Not all of them will vote for Platini, but a significant number will and that should be enough to get him over the line come 26 February.

"Securing Asia's support is the key.

"Their two power brokers, Shaikh Salman and Sheikh Al-Sabah, have given Platini their blessing - and what they want they usually get."

Who else will stand?

The rules dictate presidential candidates must have been involved in football for two of the past five years.

They then have to gain the support of five football associations in order to validate their place on the ballot paper.

The 61-year-old is part of the family which founded and owns Hyundai Heavy Industries Co Ltd, one of the largest corporations in the world.

Chung was a fierce critic of Blatter during his time with Fifa and told a news conference last month he would meet with European delegates before making his decision.

Former Fifa deputy general secretary Jerome Champagne, who tried and failed to make it onto the Fifa presidential ballot paper, is yet to decide whether he will stand.

The 56-year-old Frenchman, who secured the backing of only three national football associations last time round, has "excluded nothing" at this stage.

What does a Fifa president do?

He or she presides over an executive committee, which is where the organisation's real power lies.

The president supervises the committee's eight vice-presidents and 15 ordinary members, casting a deciding vote when necessary.

According to Fifa's statutes, the president also:

The salary for a Fifa presidential salary is shrouded in secrecy and estimates vary wildly.

Amounts in British pounds are based on historical exchange rates.