That was the story of Manchester United's pre-season tour of the United States, which ended with a 2-0 defeat by Paris St-Germain in Chicago on Wednesday.

After watching all four tour games, BBC Sport assesses which players impressed, who has cause to worry and what shape United are in for the new Premier League season.

Manager Louis van Gaal made little attempt to hide his plan for the new season. Nine players started every game. Goalkeeper David De Gea, presumably, would have done had he been fit for the first two matches and Morgan Schneiderlin still featured for 45 minutes as a substitute against PSG.

Midfielder Schneiderlin and fellow newcomer Matteo Darmian both did well. Reservations amongst some fans about 5ft 11in Daley Blind's ability to cope with the physical demands of being a central defender in England's top flight are evidently not shared by his manager.

Luke Shaw has dispelled the doubts over his fitness that surfaced on last year's pre-season tour and led to his omission from the England squad for the Under-21 European Championships.

Captain Wayne Rooney and new £31m forward Memphis Depay both scored and showed in flashes they can be effective together.

Of those who did not start regularly, goalkeeper Sam Johnstone played most often, even getting a run-out ahead of Sergio Romero at Soldier's Field on Wednesday.

Andreas Pereira was particularly impressive against PSG, Adnan Januzaj equally so four days earlier in that 3-1 defeat of Barcelona.

To 'lose' one Argentine was unfortunate. For United to find themselves without two smacked of carelessness.

Van Gaal said on Wednesday he did not even know where forward Di Maria was, as PSG coach Laurent Blanc indicated talks over the winger's transfer to Paris were "close to the end".

Rojo's passport, though still in date, was not valid for entry into the United States.

Jonny Evans did make it, but might not have been missed even if he had not.

At 27, with 198 first-team appearances behind him, Evans now appears to be behind fellow Northern Irishman Paddy McNair in Van Gaal's defensive pecking order.

Old Trafford insiders say the centre-back still has a future at the club. They did not say what as.

Chris Smalling, Juan Mata and Ashley Young almost certainly do, but that trio may not wish to analyse Van Gaal's treatment of them too closely.

Smalling, who signed a new contract three months ago, looks like being the victim of Van Gaal's desire to pair right and left-footed central defenders together.

That the manager got Smalling's first name wrong when the pair were sat together at a press conference does not imply the 25-year-old is uppermost in his thoughts.

Mata and Young were criticised within the outline of Van Gaal's argument that United need more speed and creativity.

As his manager bluntly pointed out, Mata "does not have high speed". Young's contract expires in 2016 and the club have shown little inclination to renew it.

Marouane Fellaini is paying the price for the red card at Hull on the final day of last season that rules him out of the opening three games of this campaign. The Belgian's involvement was restricted to 28 minutes against Barcelona.

Of the new arrivals, Bastian Schweinsteiger is the one who disappointed. The German World Cup winner looked short of fitness in the first two games, missed the third through injury and was substituted at half-time in Chicago when he faded following a bright start.

If Manchester United had got their way, the names of Angel Di Maria and David De Gea would never have been mentioned on this trip.

Instead, the pair were a continual presence even if, in Di Maria's case, he was not even there.

United have given up trying to entice the Argentine back into the fold. Now the more pertinent question should be 'what is taking you so long?'

When the transfer for their £59.7m record signing to join PSG goes through, United are likely to invest £22m of the proceeds in Spain forward Pedro. But as the 28-year-old has never been a regular for Barcelona, there are plenty who question the merits of that imminent move.

Having set down the non-negotiable marker of demanding Sergio Ramos in exchange for De Gea, Van Gaal raised the spectre of an embarrassing climb-down when he said the situation for the player and his club was "unfavourable" on Wednesday.

Could that mean De Gea spending the final year of his contract on wages agreed when he arrived as a skinny 21-year-old, looking anything but the world-class performer he has matured into since?

If so, Argentina number one Sergio Romero is a handy insurance policy.

Anders Lindegaard did not figure last season and is in the final year of his contract, while Johnstone, 22, is earmarked for a loan move to Preston if De Gea leaves.

Ajax's Jasper Cillesen remains the most likely replacement for De Gea and is still available to play in the Champions League group stage, despite being part of the Ajax side that drew 2-2 with Rapid Vienna in a third qualifying round tie on Wednesday.

How will United line up against Tottenham? 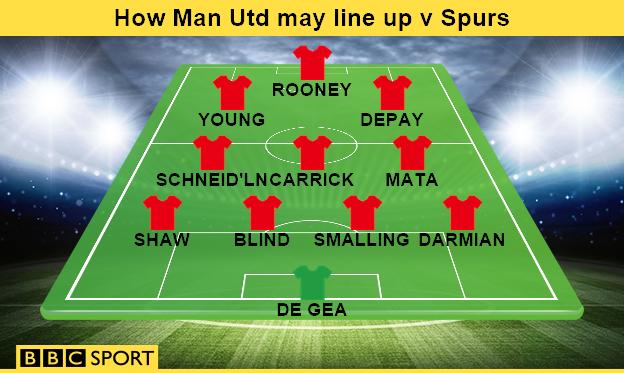 United face Tottenham in their first game of the Premier League season at Old Trafford on 8 August.

While double training sessions have been the order of the day, there has been some down time.

Midfielder Ander Herrera was accompanied by Juan Mata, David De Gea, Matteo Darmian and Antonio Valencia on a visit to the 'first Starbucks' in Seattle.

Jones and Smalling were among a party that visited San Francisco's Golden Gate Bridge, while NFL stars Jermain Kearse and Doug Baldwin showed off some of their skills at a United training session.

Van Gaal's increased influence was also evident in the tour schedule. Twelve months ago, the Dutchman was aghast at the amount of travelling his players were asked to do, not just from city to city, but from hotel to training ground.

This time United based themselves in Bellevue, in Washington state, rather than Seattle 10 miles away, due to its proximity to the training centre of the local NFL side Seahawks.

That was followed by eight days in San Jose, California, a couple of hours south of San Francisco.

Van Gaal had the match against San Jose Earthquakes moved to the 18,000 Avaya Stadium from Berkeley because he did not want to be faced with a round-trip of almost 100 miles. Organisers had to make refunds to fans who had already purchased tickets to watch the game at the 63,000-capacity California Memorial Stadium.

All United did on their final stop in Chicago was play a match against Paris St-Germain. Tuesday's training had been done prior to their arrival at 10pm. They were on their flight home 26 hours later.

Van Gaal's front-foot organising contrasts sharply with the light-touch commercial approach, largely because of a quirk in United's kit deals. Their 13-year association with Nike ends on 31 July, so their 2015-16 kit and associated apparel will not be revealed until Saturday.

By spending pre-season in the US for the third time in five years, United are solidifying their presence. Fans wearing their shirts were by far in the majority at all four games, including against Barcelona.

Pre-season Stateside? It's all the rage

If Manchester United are a sought-after presence, they have not been lonely on this side of the Atlantic for the past 17 days. Six other English clubs - Chelsea, Tottenham, Sunderland, Newcastle, West Brom and AFC Bournemouth - have also visited at some stage during that period.

Although Van Gaal complained about the state of the pitch at Century Link Field after United beat Club America on 17 July, he has found the remaining facilities to his liking.

The arrival in Major League Soccer of Didier Drogba, Steven Gerrard, Frank Lampard and Andrea Pirlo over the last month alone can only raise the profile of football in the US, meaning even more clubs will be attracted to the country as a pre-season destination.