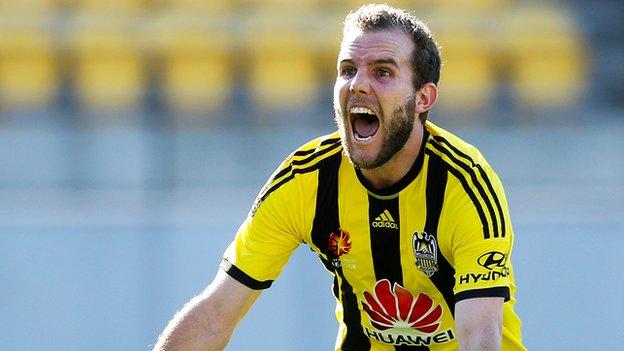 South African football clubs, who have long coveted top African talent to bolster their squads, are now turning to an unusual source for players to strengthen their rosters for the coming season.

Instead of plundering the best talent in the southern African region, and seeking to compete with European and north African clubs for top talent elsewhere around the continent, teams from the Premier Soccer League are going Down Under.

In recent weeks, five internationals from Australia and New Zealand have been signed by PSL teams and there are reportedly more on their way before the league kicks off next month.

I was after a new challenge and change of scenery. Football is massive in South Africa and I'm loving it

It all comes on the back of the impact made by striker Jeremy Brockie (pictured, top), who caused a storm in the second half of the last South African season and is the catalyst for the sudden turn of attention toward the Antipodean market.

The New Zealand international scored 10 goals in 17 league and cup appearances for SuperSport United from February.

He is now the subject of a potential record breaking transfer bid from big-spending Mamelodi Sundowns, who are desperate for a potent finisher as they plan for another African Champions League campaign next year.

Brockie's finishing prowess caught the eye and with South African clubs complaining about the demands of local players, eyes are now on the new market.

Ambitious Bidvest Wits, who are seeking to end the monopoly of the PSL by the likes of Kaizer Chiefs, Orlando Pirates and Sundowns, have added New Zealand international Kris Bright to their squad.

The 28-year-old was last in South Africa at the 2009 Confederations Cup and has had a journeyman career at club level in the Netherlands, Norway, Greece, England, Hungary, Malta, Finland and India.

The University of Pretoria are importing Harry Edge, another Kiwi, who has been on the books of Dutch club OPEC Zwolle. Edge is a 21-year-old and played against the Pretoria club when their reserve team toured the Netherlands in May.

"South African players are no longer good value for money. They are pricing themselves out of the market with their salary demands," explained Jose Ferreira, chief executive officer of Wits. "The Australians and the Kiwis offer good value."

Brockie arrived without much fanfare last December but very quickly impressed coach Gordon Igesund, whose predictions about his prowess were initially greeted with scepticism but very quickly heeded when Brockie began to bang in the goals, notably a sensational half volley to eliminate Pirates from the Cup.

Brockie had played against South Africa for the All Whites of New Zealand in May last year in Auckland when Igesund was still Bafana Bafana coach.

Contact was made at the time and when Igesund left the national team job soon after, and then went to SuperSport, the out of contract Brockie was offered a deal.

The 27-year-old joined Matsatsantsa on a two-and-a-half year contract from Wellington Phoenix, keen for a new adventure after previously failing to impress in Major League Soccer in North America.

"I was after a new challenge and change of scenery. Football is massive in South Africa and I'm loving it," he said.

PSL clubs traditionally troll the southern African market for the best talent and also look to Ghana and Nigeria for others, although do not have the pulling power of European or north African clubs.

In more recent years there have been a bevy of Brazilians imported plus players from eastern Europeans at PSL clubs with Bosnians, Georgians, Latvians and Serbs adding to the appeal of the league.

South African clubs pay between US$10,000 to US$25,000 monthly to better players but there is also a current controversy over some earning less than US$500 per month while in the employ of top-flight teams.