The Aberdeen squad that boarded the charter plane bound for the Granite City was a relatively buoyant one.

The positive mood was perhaps tinged with a bit of relief, having left Almaty with a result that could easily have been more damaging to their hopes of further Europa League progress.

But for a couple of terrific Danny Ward saves and a late rattling of the crossbar by Stanislav Lunin, the job at Pittodrie next Thursday might have been considerably tougher.

As it is, the tie is finely poised, with Kenny McLean's away goal in the 2-1 loss potentially priceless.

Derek McInnes was pretty bullish about his side's chances of turning the tie round at home but acknowledged Kairat had performed well, stating they would have to play as well again to prevent his team prevailing.

Certainly they have individual players capable of hurting Aberdeen. The veteran Anatoliy Tymoshchuk, his central midfield partner, Mikhail Bakaev, and the skilful pair of Isael and Bauyrzhan Islamkhan were constant threats and McInnes will need to ensure they have less influence at Pittodrie. 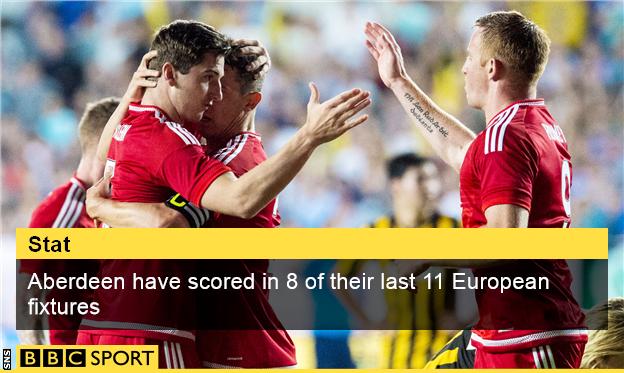 The manager was a lot happier with the second-half display, which brought them the goal, but Aberdeen will have to impose their own authority on the second leg to have a chance of success.

Ryan Jack and Graeme Shinnie must boss the midfield in the manner of Tymoshchuk and Bakaev, while Niall McGinn and Jonny Hayes will have to provide the creativity produced by Isael and Islamkhan.

McLean has surely played his way back into the starting line-up.

From the moment he was introduced, his willingness to run at the Kairat defence changed the momentum of the game, just as his stunning finish changed its balance.

He looked every bit the player Derek McInnes signed from St Mirren in January and, although McInnes felt my suggestion that perhaps this season we'd see the "real" Kenny McLean was an unfair reflection on his performances last term, there did appear to be an added spark to his play that Aberdeen fans will hope continues.

The conundrum for the manager - a pleasant one - is who to leave out.

Peter Pawlett was benched at McLean's expense for the home game against Rijeka in the last round, but he too can offer the creativity Aberdeen will need in the second leg.

Another option would be to shift Graeme Shinnie to left back - as McInnes did in the closing stages in Almaty - and play a flat back four, allowing him the potential to accommodate both McLean and Pawlett.

It is an indication of the growing strength of the Aberdeen squad that such permutations can be mulled over without weakening the team.

A bench that included McLean, Adam Rooney, Willo Flood and Barry Robson is further testament to that.

So there is much for McInnes to consider as he continues to mould a squad that looks increasingly at ease on the European stage.

Not least among those considerations is how to balance the desire to have the strongest team available for the second leg with an equal desire to begin the league campaign on Sunday with a positive result against Dundee United.

These are challenges he and his players will relish though.