Carlos Carvalhal made a winning debut in English football as his Sheffield Wednesday side beat Bristol City on their return to the Championship.

In a remarkable piece of end-to-end action, Lewis McGugan made it two with a volley, having cleared a Wes Burns header off the line moments earlier.

And they started solidly against a much-changed Owls side led for the first time in competitive action by 49-year-old Portuguese head coach Carvalhal, who replaced Stuart Gray in June. 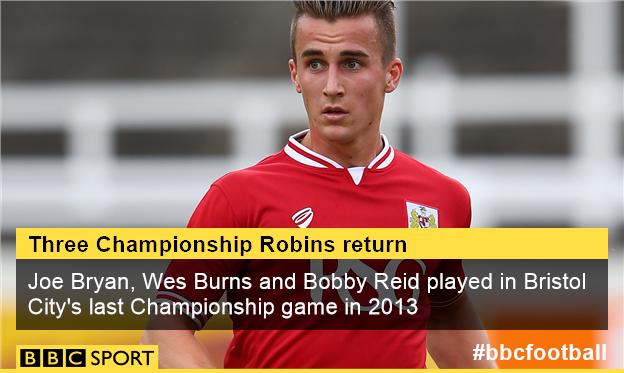 Four of Carvalhal's 11 summer signings - Lopez, Marco Matias, Ross Wallace and Jack Hunt - started on their debut for the hosts and combined to create the clearest of the few first-half chances.

Matias twice threatened, first hitting a tame half-volley from a Wallace cross before shooting off target after making space for himself down the left.

A poor Aden Flint clearance then allowed Wednesday to pile more pressure on, with Wallace and Atdhe Nuhiu combining well, only for Fielding to get enough of a touch on the ball to send Lopez's 12-yard attempt over the bar.

While Fielding got a hand to Lees' header on the hour mark, the goalkeeper was beaten by the sheer power of the defender's header as Wednesday took the lead.

And just as the visitors looked to have restored parity through Burns' header, McGugan intervened on the line and immediately made his way upfield to meet a cross from Wallace and finish from close range.

Sheffield Wednesday head coach Carlos Carvalhal: "I am happy because people around me are happy. We had a very good and professional exhibition today.

"Bristol is a good team. They will be very good during the season, they play good football. We analysed them. Football is a clever game and if you understand what you have to do, it helps, and we did that today.

"I felt like our football was just as good as theirs, if not better. But the most important thing is they won the game 2-0. I don't want to harp on about the counter-attacking.

"Sheffield Wednesday are a good club and good luck to them going forward. But, when you look at it today, from our point of view, the first goal was against the run of play and you can dominate the game but if you don't win the game it doesn't mean anything."