Manchester United held on to start their season with a lacklustre win against Tottenham thanks to Kyle Walker's early own goal.

After Christian Eriksen lobbed over when clean through, United went ahead as Walker poked into his own net when attempting to tackle Wayne Rooney.

That led to a better spell for United, who did not have a shot on target until Ashley Young's 65th-minute effort.

Louis van Gaal celebrated his 64th birthday with a victory but his team were hanging on towards the end as Romero was twice called into action.

Tottenham - who finished fifth in the Premier League last season, six points behind United - started and ended the game strongly only three days after completing their final pre-season game against AC Milan in Germany.

How did United's debutants perform?

Morgan Schneiderlin was the pick of United's new recruits, who cost a combined £83.1m over the summer.

The defensive midfielder lined up next to Michael Carrick and looked energetic and willing to accept possession deep in United's half despite a couple of nervous moments early on.

The £25m capture from Southampton was put under pressure by goalkeeper Romero, whose kicking lacked conviction after Spurs pressed the hosts' defence high up the pitch.

The Argentine international made his debut after replacing David De Gea, who boss Van Gaal said was "not capable" of playing amid ongoing speculation that the Spanish goalkeeper wants to join Real Madrid.

Memphis Depay, a £31m arrival from PSV Eindhoven, played behind Wayne Rooney in attack, and while the Dutch 21-year-old did have an early shot blocked, he was frustrated by his 68th-minute substitution after a display where he looked like he needed further time to gel with team-mates.

At right-back Matteo Darmian was solid as a replacement for the departed Rafael Da Silva and showed purpose going forward.

Bastian Schweinsteiger, who came on for Carrick after his £14.4m arrival from Bayern Munich, helped see the game out with some clever touches but was booked shortly after being introduced after an hour.

Despite a gruelling summer in which he went on Spurs' post-season tour to Australia and played in the England Under-21s' ill-fated European Championship campaign, Kane looked sharp in the first half.

He made a great start to the game, setting up Eriksen for his side's best chance after five minutes, but a lack of support meant Spurs's top scorer from last season faded and Chris Smalling began to boss the United defence in an impressive display.

But the 22-year-old did show promise after questions whether he could follow up last season's superb form.

Tottenham boss Mauricio Pochettino withdrew Nabil Bentaleb eight minutes into the second half after the 20-year-old lined up with Eric Dier in the centre of midfield and gave the ball away for the goal.

However, he will have been pleased by the overall performance of his team, with £12m debutant Toby Alderweireld looking strong next to fellow Belgian Jan Vertonghen in the centre of their defence.

Manchester United manager Louis Van Gaal: "I said to Memphis that he doesn't have to play too eagerly and with too much passion and that counts for the whole team. But it's always the same - the first time you play at Old Trafford it's always difficult, but I liked the performance especially from Darmian." 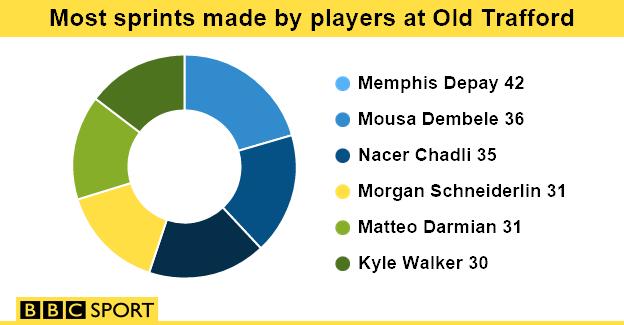 Tottenahm defender Kyle Walker on his own goal: "I tried to stick my foot in the way so that [Rooney would] kick my foot instead of the ball, so it's a bit unlucky really as I'd made up a lot of ground to get there."

Former England winger Chris Waddle on BBC Radio 5 live: "I don't think either team we've watched looked like title contenders. We haven't seen the best of them. They look a little leggy. Tottenham need a bit of pace and with United I'm not sure about them in the centre-back position."

Chris Smalling offered a calmness and reassurance in defence while many debutants tried too hard to impress. He benefitted from the presence of Morgan Schneiderlin in front of him.