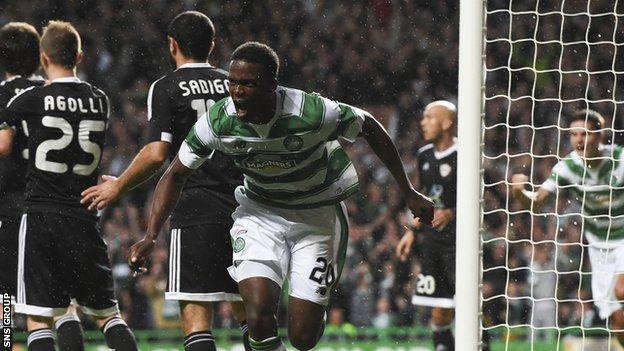 A spokesman admitted the pitch at the Tofiq Bahramov Stadium in Baku "was not ideal" currently.

This follow reports that areas of the surface had been badly damaged by the heat in Azerbaijan's capital.

But work will be carried out between now and kick-off with Qarabag confident it will allow the game to take place.

A Uefa statement said: "There are no plans to change the venue and the match is scheduled to go ahead as planned."

Celtic assistant manager John Collins says the Scottish club's officials inspected the pitch on Monday and admitted there are concerns over the quality of the surface but believes the match will definitely go ahead.

"(There's a) little concern at the moment but we'll go over it and we'll train on it and we'll check how it is," he said.

"At this level you expect the pitch to be of a good standard but if it isn't we'll just have to adapt our play.

"We got a phone call from security - they're over there and they say it's not looking good.

"The pitch is the same for both teams. If it is bumpy, we'll have to be a little bit more direct and not pass the ball in our own half if it's really bumpy.

"It's not ideal, but that's football. You've got to be adaptable."

A spokesman for FSM (Football and Sports Management), who are responsible for the maintenance of the pitch told BBC Scotland: "There is not a major problem. The pitch is playable.

"Some areas have been damaged by the heat. At the moment in Baku, it is about 38 or 39 degrees but at pitch level at midday it is about 51 or 52 degrees.

"The pitch is not great though we are working to control this, to improve the pitch and to prevent more damage, but there is nothing that can damage the players and the game will be held."

Celtic, who lead 1-0 from the first leg, remain in contact with the host club ahead of their Monday afternoon flight, with Wednesday's match kicking off at 17:30 BST.

Switching the fixture is problematic since the nearby Bakcell Arena is being used for Thursday's Europa League match between Qabala and Apollon Limassol.

If Celtic prevail in Baku they will reach the play-off round ahead of the group stage of the competition.

The Scottish champions fell to Maribor at the final qualifying hurdle last season and entered the Europa League, reaching the last 32.