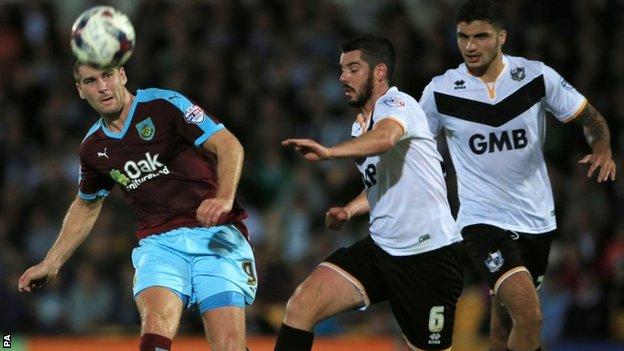 League One Port Vale reached the League Cup second round with a late home victory over Championship side Burnley.

Byron Moore converted at the far post eight minutes from time to settle a contest of few clear chances.

The 26-year-old's shot appeared to have been cleared off the line, but the goal was awarded after the referee conferred with his assistant.

Burnley, who were relegated from the Premier League last season, went closest through striker George Boyd.

"I was very pleased with the performance and obviously the result.

"There was a buzz around the ground tonight and it would be great to have a cup run for the players, the staff and of course the supporters.

"The boys took the form they showed at Crewe on Saturday into tonight and on this occasion we got the result.

"I'm not so sure there are any shocks in this competition any more.

"There seems to be several in this round every season and unfortunately we've succumbed and Port Vale have claimed a scalp.

"Credit to them because they worked hard to get the result. I felt we did a lot of things well, but we didn't have that edge in the top third of the pitch and have conceded towards the end."