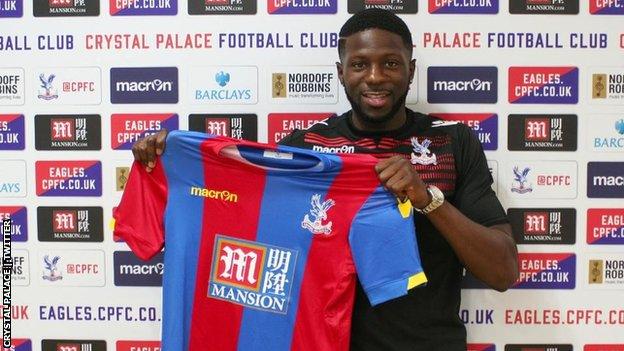 Crystal Palace have completed the signing of winger Bakary Sako on a free transfer.

The 27-year-old Mali international has signed a three-year deal after leaving Championship side Wolves.

Sako joined Wolves from St Etienne in 2012 and scored 36 goals in 118 appearances for the Midlands club.

Meanwhile, Eagles boss Alan Pardew dismissed reports of a bid for Newcastle captain Fabricio Coloccini saying "he will not be coming".

The 33-year-old centre-back has been with the Magpies for seven years and captained the club during Pardew's reign.

Pardew's comments came after Newcastle head coach Steve McClaren told a BBC radio phone-in that Coloccini had been "distracted" by links with a move at Selhurst Park.

"He wants to stay here so I am delighted," added the former England manager. "Do I need to change the captain? Why do I need to unsettle everything - he carries on."

He played a crucial role as Wolves were promoted to the Championship at the end of the 2013-14 season and was named in the League One Team of the Year.

Last year, he was the club's joint-top scorer with 15 goals, and featured in the Championship's best XI.

"I talked to some clubs but when I met manager Alan Pardew I felt a good feeling between him and me and that's why I chose Palace," said Sako.

"He plays attacking, attractive football so it should be good to play here and score some goals. That's why I came to join him."