Manchester United maintained their impressive record at Villa Park as they beat Aston Villa thanks to Adnan Januzaj's first-half strike.

Januzaj, who made a rare start having been linked with a loan move away, scored as United took their unbeaten run at the ground to 20 league matches.

The winger put United ahead when he got on the end of Juan Mata's incisive pass and finished from close range.

The victory lifted United to the top of the Premier League table for the first time since August 2013.

Memphis Depay had a chance to increase the margin of victory after the break when he was slipped in by Mata, but could only curl his shot past the post.

Villa only sporadically put the United defence under pressure with forward Gabby Agbonlahor's header from a corner the best chance that the home side could muster. 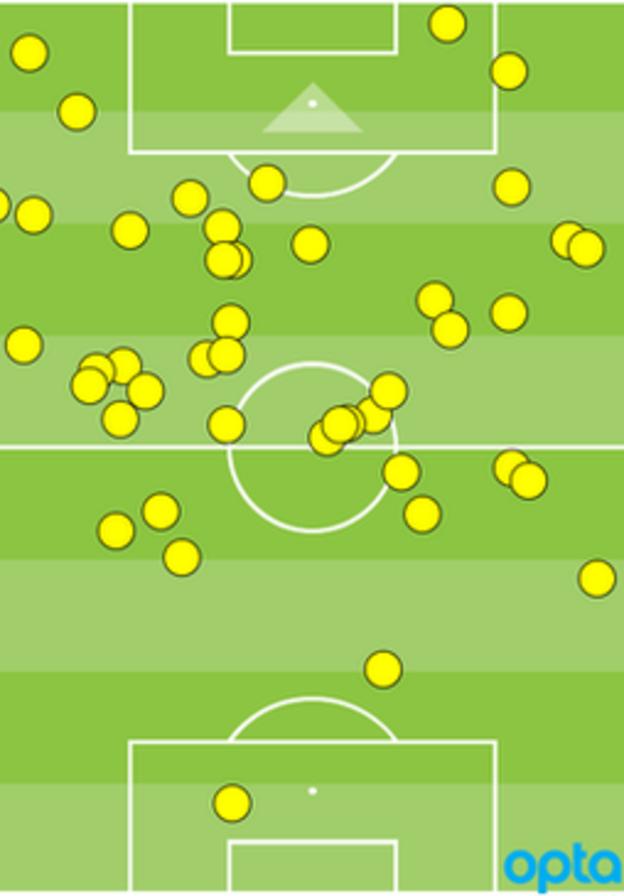 Striker Wayne Rooney was supposed to be the main man up front this season but the early signs have been a little worrying for United.

As in the opening game against Tottenham the United and England skipper struggled to make an impact leading the line.

And it was not until injury time that he touched the ball in the opposition penalty area, as demonstrated in this graphic.

Manchester United manager Van Gaal said before the season started that he may not buy another striker because Rooney could carry the club's goalscoring burden.

The player himself has set a target of 20 goals in this campaign. but United have only managed three shots on target in two games.

Given Rooney's lack of impact against Villa, Van Gaal may well have to revise his thinking before the transfer window closes.

Villa sold striker Christian Benteke to Liverpool for £32.5m this summer and they looked poorer for the striker's absence against United.

Time well tell if two of the players Villa manager Tim Sherwood signed to replace him - Jordan Ayew and Rudy Gestede - can fill the powerful Belgium international's boots in attack.

"The boys gave everything for the cause but we didn't carry enough attacking threat," Sherwood said.

"The attacking force wasn't there. It may be down to personnel missing who might give us a little cutting edge."

Van Gaal sprung something of a surprise with his selection of Januzaj - who was not even in the match day squad for his side's 1-0 win over Tottenham in their opening game of the season - ahead of Ashley Young.

The youngster has been widely tipped to leave Old Trafford on loan, with Sunderland and Everton among those linked with season-long deals.

Although he looked a little short of fitness it was a good performance as the central playmaker in an attacking triumvirate behind Rooney.

"You have to wait until we have closed the transfer period," Van Gaal said of Januzaj's future.

"I am pleased with the goal because it was a wonderful goal but you have to do more than scoring a goal."

Men of the match

Much has been made of Manchester United's need to sign a new centre-back but having restricted Aston Villa to just one shot on target in this encounter the Red Devils look tight at the back.

Daley Blind and Chris Smalling have formed a solid pairing at the heart of the United defence and both players impressed as they snuffed out whatever threat Villa posed in the final third of the pitch.

England international Smalling's commanding presence in the air and his confident reading of the game meant he probably shaded it ahead of Blind.

Manchester United manager Louis van Gaal: "I think we played better than last week. For an away match I am very happy. We kept the ball better in the first 20 minutes, we scored a fantastic goal. After that we were a little bit nervous but in the second half we played very controlled football and could have scored more than one."

Aston Villa captain Micah Richards: "If you look at our team from the beginning of last season to this season there are some really exciting players - good ball players in midfield with power and pace all over. It is exciting times, not the result we wanted but we move on."