Mame Diouf headed in a late equaliser for Stoke as they fought back from two goals down to draw against Tottenham in a thrilling game at White Hart Lane.

Eric Dier gave Tottenham the lead with a header from a corner and Spurs added a second before half-time when Nacer Chadli volleyed in at the back post.

Marko Arnautovic pulled a goal back from the penalty spot after Toby Alderweireld brought down Joselu.

And Diouf secured a point when he got on the end of Stephen Ireland's cross.

It was deserved point for Mark Hughes' side who diligently kept at their task in the second half, even though a comeback looked unlikely after their first-half display.

Tottenham, however, will rue missed opportunities to have secured the points having had the majority of clear-cut chances.

Stoke have lost none of their steel

Potters boss Hughes has looked to develop a more expansive style of play, and that has been reflected by his recruitment policy.

Stoke have brought in more flair and attacking players under Hughes but any concerns that they have lost any of their grit was answered.

For the majority of the game they were second best to Tottenham and a lesser team might have thrown in the towel when faced with a two-goal deficit at half-time. Not a bit of it.

The spirit and battling qualities which have characterised their time in the Premier League, instilled by Hughes' predecessor Tony Pulis, were very much to the fore.

Stoke striker Diouf was the embodiment of that with his work-rate, as demonstrated in this heat map.

"At 2-0 it was a big task for us but we understood what we needed to do, disrupt their rhythm, and do the hard yards," Hughes said.

"The spirit has been great. The key is that we're bringing good players in and good guys as well."

Although he did not get his name on the scoresheet, it was hard to ignore Tottenham's Harry Kane.

The striker had a hand in everything in the final third and showed he is more than just a goalscorer.

It was noticeable how Kane has worked on different aspects of his play. The manner in which he linked play, dropped deep into pockets of space and created chances for team-mates certainly bodes well.

Stoke's record £12m signing Xherdan Shaqiri was forced to watch the match from the stands because of a suspension that was carried over from his time at Inter Milan.

Although they ultimately fought back the Potters looked desperately in need of a player who can unlock defences, particularly away from home.

The tireless work of Jonathan Walters, Diouf and Arnautovic was to be applauded, but that creative spark was missing until Hughes made changes.

The Welshman will be itching to get Swiss playmaker Shaqiri and Bojan, who is continuing his rehabilitation from a long-term knee injury, involved as quickly as possible.

Man of the match - Mame Diouf 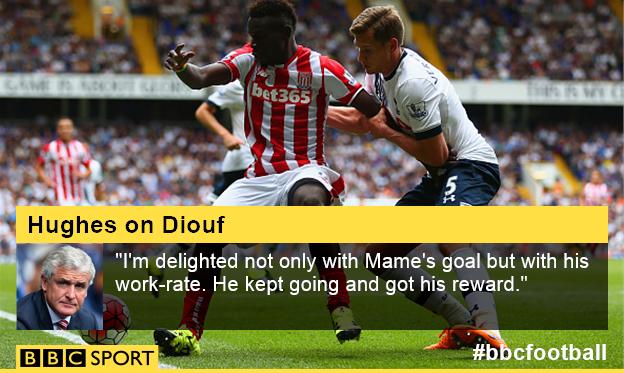 Tottenham boss Mauricio Pochettino: "In football it's never closed until the final whistle. It's disappointing. The team played very well for 70 minutes and the penalty changed the game a little bit. We need to be optimistic, look forward and keep working."

Stoke manager Mark Hughes: "After the break we understood what we needed to do better, talked about it in the break and came out with more resolve. The substitutions helped us, we just started to retain the ball in the final third and started to create chances.

"If the game had gone a little bit longer who knows we might have been greedy and claimed two more points."