Diego Fabbrini scored one goal and helped create two for Kike as Middlesbrough eased to victory over Bolton at the Riverside Stadium.

Fabbrini opened the scoring with a fierce 25-yard effort before sending Kike through to slot home his first.

Kike reacted quickest to make it 3-0, pouncing after Fabbrini's deflected shot was tipped onto the bar.

David Nugent went close to marking his Boro debut with a goal, but turned an injury-time chance over the bar.

Nugent came off the bench for Aitor Karanka's side in the second half, less than 24 hours after joining last season's Championship play-off finalists from Leicester City for a reported fee of £4m.

Defeat for Neil Lennon's Bolton came came only four days after their shock League Cup defeat by League One side Burton Albion.

While Middlesbrough got off to a slow start last week after failing to get a shot on target in their goalless draw at Preston, they started brightly against the Trotters in their first home game. 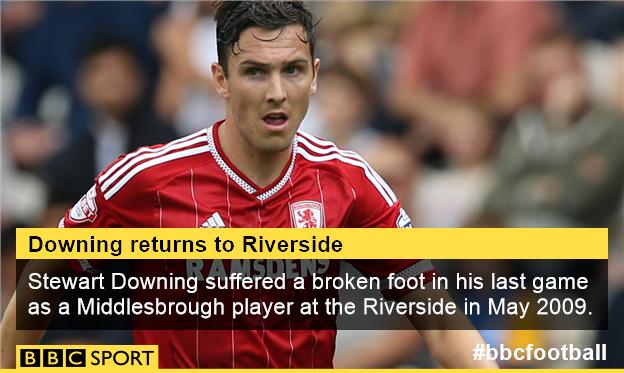 Stewart Downing, in his first match as a Middlesbrough player at the Riverside in more than six years, tested goalkeeper Ben Amos inside two minutes, while George Friend also threatened before Fabbrini put Boro in front with his first goal for the club.

The former Udinese midfielder then played provider, with Kike beating Amos after running onto a through ball from the Italian.

Boro piled forward in search of a third and Albert Adomah went close before Kike pounced to complete his first-half brace - prodding home after Amos tipped Fabbrini's deflected shot onto the underside of the bar.

Bolton failed to get a shot on goal in a first half which ended with Kike going close to a hat-trick, with Amos keeping the Spaniard out from close range.

Middlesbrough boss Aitor Karanka: "It could be the best half we've played in my time in charge.

"It was an amazing first half. We played the way I want to play always.

"We have very good players and I have a very good squad. I told them before the game that last week was an example of us entering the game thinking it would be easy.

"We have to have the same attitude as this game, and we have to forget the final and last season."

Bolton Wanderers manager Neil Lennon: "I take full responsibility for the first half. I set the team out that way - with three at the back - and it didn't work.

"The players didn't get to grips with it very well and we let Middlesbrough dictate the game.

"I accept the blame, but I still expect my players to compete and press. It's a learning experience for me and I apologise to the supporters."