Algerian Riyad Mahrez scored twice - including a penalty - in between efforts from striker Jamie Vardy and winger Marc Albrighton.

"I told my players, 'when you go on the pitch and you hear the song Fire from Kasabian, that means they want warriors'," said Ranieri.

"I want to see them as warriors for the fans."

Ranieri, 63, replaced Nigel Pearson in the summer and said Leicester's opening-day win "was better" than his first game at Chelsea.

His previous stint in England began at Chelsea in 2000 as the Blues came back from 2-0 down to draw 3-3 against Manchester United at Old Trafford.

Ranieri left Stamford Bridge in 2004, having guided Chelsea to second spot in the league, as well as a semi-final place in the Champions League the same season.

After being replaced by Jose Mourinho, he went on to manage Valencia, Parma, Juventus, Roma, Inter Milan and Monaco.

"The performance was outstanding from the beginning. I was calm because I saw my players concentrate," said Ranieri.

"It was a very good start and I am very happy with my players in the first match, which is so important in front of our fans,"

Former Villa man Albrighton netted Leicester's fourth and praised the approach his new manager has brought to the club.

Last season, the Foxes looked like being relegated, but Pearson won seven and drew one of his last 10 games in charge to survive in the top-flight.

"Ranieri didn't want to change too much but he has new ideas and we are taking them on board," said Albrighton.

"It is too early to say what the season will hold but if we can take confidence and pride in the way we play we will do well.

"Towards the end of last season our main strength was our starts and we just carried that on." 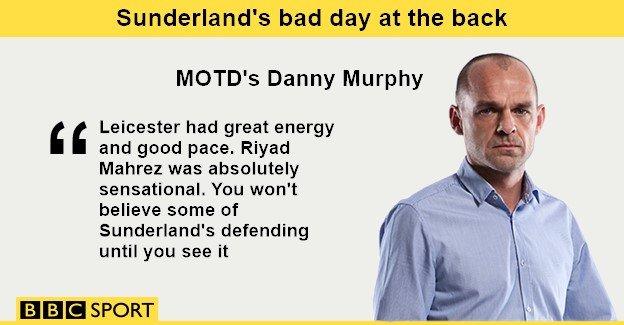 Although Jermain Defoe and Steven Fletcher both struck for the Black Cats, they were soundly beaten.

Manager Dick Advocaat was appointed in March and ensured Sunderland's survival in the Premier League.

After agreeing to stay on as boss for the 2015-16 season, he brought in five players to improve the side, but says they are still short.

"After 10 minutes there were three crosses and three goals. At this level this cannot happen," said the Dutchman, after pairing Sebastian Coates and Younes Kaboul in central defence.

"We have to wait [for new players]. We struggled again. Everybody can see that we need more."