After what seemed like an endless wait, all the drama, excitement and controversy of the Football League made a welcome return on Saturday.

With so many games and moments to get your head around, BBC Sport has picked out five things you may have missed from the action.

Life is easy for Championship newcomers

They may have been the top scorers in the country last season with 101 goals in League One, but life is meant to be a lot tougher in the Championship.

But you try telling that to Karl Robinson's men, who got their first ever season in the second tier under way with a thumping victory at Rotherham.

Harder tests will no doubt lie ahead, but the opening day table makes pretty viewing for Dons fans as they sit top of the pile.

He's represented England in two World Cups, scored in a Champions League final and played for arguably the world's biggest club, but Teddy Sheringham has now stepped onto the other side of the touchline for the first time.

Unfortunately for Teddy, things didn't quite go to plan today, as his Stevenage side were comfortably beaten at home by Notts County.

The 49-year-old didn't have to taste defeat much in his career with Manchester United, but he will have to get used to the highs and lows of management very quickly.

A good deed by Doncaster

There's nothing like a bit of controversy to kick-off the new season - but a sporting gesture made sure everything ended on friendly terms between Doncaster and Bury in League One.

After Bury put the ball out to allow treatment to one of their players, Doncaster's Harry Forrester accidentally chipped the ball over goalkeeper Christian Walton and into the net while trying to give it back.

The goal stood, but the hosts allowed Bury's Leon Clarke to walk the ball in to ensure a share of the spoils.

Quote of the day 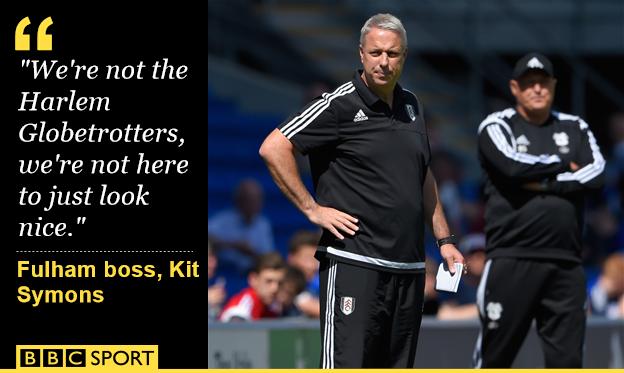 Fulham only registered one shot on target, Matt Smith's goal, in their 1-1 draw at Cardiff.

It led to boss Kit Symons urging his side to carry more of a forward threat as the season goes on rather than just playing attractive football with no end product.

I wonder if the Harlem Globetrotters ever compare themselves to Fulham?

He'd only netted seven league goals in 78 appearances before today, but Swindon's Nathan Byrne turned into the unlikely match winner with three second-half goals for the Robins.

The feat from the winger sparked a fine comeback from Swindon who found themselves 1-0 down at half-time.

Byrne also takes the honour of scoring the season's first hat-trick in the Football League.