Brazil midfielder Coutinho scored the only goal with a stunning long-range strike in an otherwise drab encounter.

"You have to keep him on the pitch as long as you can because he has that moment," said Rodgers.

"I am glad I kept him on but I can't profess to be any sort of genius. It was fortunate he got the goal and he stayed on."

The Northern Irishman added: "He did well to last the match because he has only been back from the Copa America for three weeks.

"He did well to turn Steve Sidwell with a wonderful touch. To beat Jack Butland shows the real quality of the goal."

The two sides met in the last game of the 2014-15 season, when the Potters ran out 6-1 victors. Despite the result, Rodgers kept his job and was pleased with his team's improvement over the summer.

"To get a win and perform from where we were 11 weeks ago - I thought it was an outstanding collective performance. It certainly feels better than 11 weeks ago," he said.

"You can never guarantee you are going to win or lose a game but for me it was about ensuring the personality came out in the team.

"Eleven weeks ago we were nowhere near that - it was embarrassing on the day. It was a one-off game, a unique game, but it still happened. I think that puts it to bed." 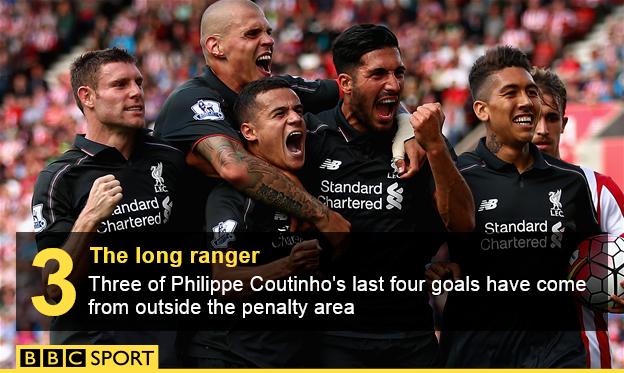