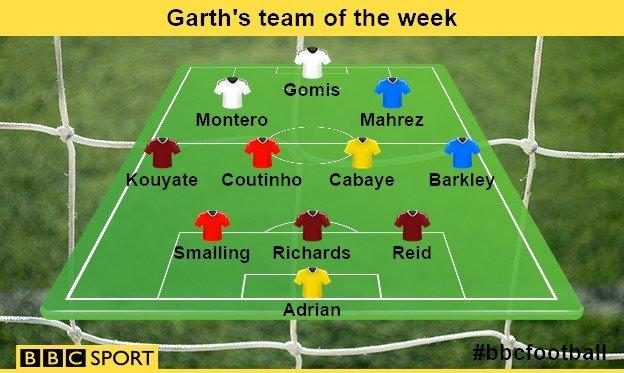 Well was it worth the wait? Premier League action returned and 27 goals across nine weekend matches was not a bad start.

Arsenal were humbled at home by a superb West Ham, Liverpool left it late to beat Stoke and Chelsea faced early questions as Swansea left Stamford Bridge with a point.

Manchester United started with a key win, while Crystal Palace and Leicester continued to show how comfortable they feel at this level with solid opening-day victories.

Premier League new boys Bournemouth suffered a tough defeat while Watford won an admirable point - but none of their players make my team of the week.

Do you agree with my selections?

The stop Adrian made with his left boot late in the game to deny Alexis Sanchez was important but the save from Olivier Giroud provided the spring board for West Ham's victory.

It was from that save that the Hammers went straight up the other end of the field to put a second goal past Arsenal's Petr Cech. The mere fact that Adrian only had two shots of any note to save in the second half tells you more about the superb collective effort of the Hammers' defence than Arsenal's attack.

This for me was the most impressive performance of the weekend. The New Zealand defender was at the heart of a brilliant defensive display by the Hammers but perhaps his most important role was looking after debutant Reece Oxford.

Oxford insists that it was Reid's continuous encouragement throughout the match against the Gunners that provided the platform for the 16-year-old midfielder to perform so impressively. It could have been a nightmare for Oxford and West Ham had it not been for Winston Reid's calming influence at the back.

This was not Manchester United's greatest start to the season but they did get three points largely through a very effective performance by Chris Smalling. If I heard the commentator say "and away by Smalling" once he must have said it a dozen times.

With Angel Di Maria now living in Paris and David De Gea destined for Madrid it's critical that Louis van Gaal keeps Chris Smalling in Manchester if he is serious about lifting the Premier League title this season.

Here is a lad who decided not to hang around waiting for work in England but went abroad to rediscover his confidence. After a spell with Fiorentina the former Manchester City and England defender looked back to his commanding self against a Bournemouth side that lacked a cutting edge.

With a few more performances like this the new Aston Villa captain may find himself back in the England line-up. This is a great signing by Tim Sherwood.

What a goal. Ross Barkley is capable of producing a strike like this one and he needed to against a very impressive Watford. The Premier League newcomers gave Everton a terrible fright and it took a thunderbolt from the England international to get the Toffees out of a very sticky situation.

This lad must now kick on this season if he intends to fulfil the promise he showed manager Roberto Martinez two seasons ago.

I was amazed when Alan Pardew convinced Yohan Cabaye to leave Paris St-Germain and join him at Selhurst Park. I was even more surprised to see the Frenchman pick Norwich to pieces in an impressive second half performance by the Eagles.

I must say the game lay in the balance until referee Simon Hooper completely misjudged a piece of brilliance by Cameron Jerome and disallowed his goal for dangerous play. Unlike Cabaye it was Mr Hooper's first Premier League appearance and it showed.

What a start for Brendan Rodgers. The last time Stoke played Liverpool the Potters hammered them 6-1. Not so this time.

Liverpool had Nathaniel Clyne, Joe Gomez and James Milner offering more stability, but it was Philippe Coutinho who made the difference. The way the Brazilian spun, knocked the ball out of his feet and smashed his shot past Stoke's Jack Butland was top class.

They have only played one game so far this season but this is a very different Liverpool to the one I saw in their last campaign.

This guy is fast becoming West Ham's most influential player. He was impressive last season under Sam Allardyce but seems to have assumed a more authoritarian role under new manager Slaven Bilic.

At the Emirates he bossed Arsenal's star-spangled midfield along with the help of his support acts Mark Noble and Reece Oxford who, by the way, looks like a star in the making.

The Algerian was absolutely sensational, scoring twice. He should really have graced his performance against a totally outclassed Sunderland with a hat-trick. Poor old Dick Advocaat should have listened to his wife who begged him to give it all up and retire at the end of last season.

Had the Sunderland boss listened to her, she would have saved him from this mauling and, on this evidence, another season grovelling at the foot of the table fighting relegation.

What a start to the season by Bafetimbi Gomis. His performance against the champions and the best defensive line-up in the league was simply outstanding. I went to Stamford Bridge to see how Chelsea might start the season and witnessed a centre-forward terrorise John Terry and Gary Cahill.

If Gomis keeps playing like this, Swansea manager Garry Monk may have to consider offers.

I cannot remember ever seeing a player give Branislav Ivanovic such a torrid time as Jefferson Montero did at Stamford Bridge, in what I thought was an excellent match. I've seen Montero destroy other defenders but never Ivanovic - it was jaw dropping.

If Montero can continue with this sort of form then there will be a few defenders in for one hell of a ride.