West Ham were able to beat Arsenal at the Emirates Stadium on Sunday because they got their tactics right and also because they had the discipline to stick to their plan and make it work.

Arsenal should still have dealt with it better than they did, though.

The Gunners were up against an extremely well-organised side, but with the experience they have against teams doing various things to try to stop them in the past, they should have been able to cope.

Yes, Arsene Wenger's side still threatened and West Ham would not have won without their keeper Adrian playing well, but there was a reason why Arsenal did not create as many chances as they normally would at home.

West Ham set up in a diamond shape which meant all four of their midfield players stayed narrow.

The Hammers had a lot of players in central areas - especially when one of their strikers dropped in as well to make it a midfield five - but generally a diamond means you are weaker out wide.

Arsenal's 4-2-3-1 formation did not take advantage of that, however, because too many times when they had good possession their players who were supposed to be wide came inside instead.

The Gunners actually started with Alex Oxlade-Chamberlain on the right and Santi Cazorla on the left but Cazorla always looked to come inside and, although Oxlade-Chamberlain had a bit of joy down his flank a couple of times in the first half, he drifted in to to look for the ball.

They created an overload in what you would usually call the number 10 position behind Arsenal's striker, Olivier Giroud, and at times when the Gunners came forward they had as many as five players who were no wider than the lines of the penalty area. 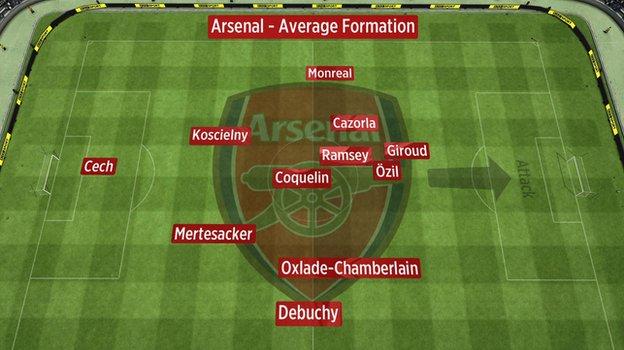 That was easy for West Ham to defend against in their formation and ultimately it meant Arsenal had to try to play some brilliant intricate football to get through.

They are capable of doing that, as we have seen from them many times before, but against the Hammers they came up a team who defended brilliantly and the Gunners did not adapt to try to find a different solution.

Full-backs could not find the answer

You might think the width Arsenal lacked could have come from their full-backs. That is true, but the problem with that is that the opposition can see it coming.

When they join in with attacks, full-backs are usually getting the ball deeper and trying to play balls into the box from further away from the goal, which again is easier to defend against.

On Sunday, Arsenal also missed Hector Bellerin and Kieran Gibbs, who would usually have been at right-back and left-back.

Those two are much more attack-minded and also quicker than Mathieu Debuchy and Nacho Monreal, who did not have much of an impact.

It was only when Theo Walcott and then Alexis Sanchez came on in the second half that the Gunners started to get the ball wide with any purpose, stretch West Ham and get behind their defence.

What could Arsenal have done differently?

It took Arsenal boss Arsene Wenger almost an hour to make a change and I am surprised he did not switch his formation or even his personnel at half-time, or alter his instructions to his players. 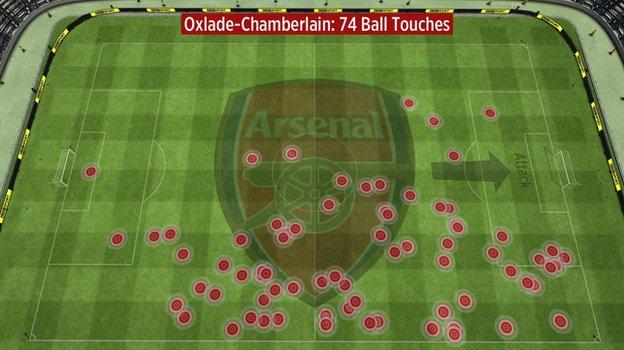 He could have told Oxlade-Chamberlain not to come inside at all for the first 10 or 15 minutes of the second half.

If Arsenal's passing was quick enough, that would have created two-on-one situations out wide. If the full-back Debuchy gives the ball to Oxlade-Chamberlain in a wide area, it is very hard for Mark Noble, the left-sided West Ham midfielder in their diamond, to get across in time to help Aaron Cresswell.

Then, if Noble does make it, he then leaves some space inside for someone else.

What actually happened was that Oxlade-Chamberlain continued to come inside where Noble and several other West Ham players were waiting.

The problem for Arsenal was that, time and time again, their players would look up with time on the ball and only see team-mates in central areas and it became very difficult for them to find the perfect pass to get through. 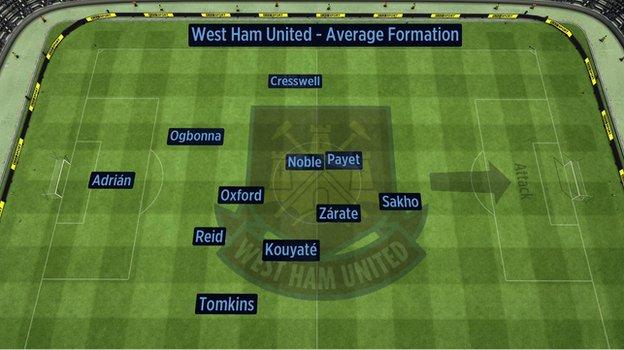 Gunners should not be too disheartened by defeat

You often see some odd results on the opening weekend when the top teams put in some below average performances for various reasons.

What happened to Arsenal on Sunday does not mean that playing that way, with players coming in off the wings, will not work for them because it definitely will.

Part of the reason West Ham kept them out was that they defended brilliantly.

There were some outstanding individual performances from the Hammers all over the pitch, none more so than 16-year-old Reece Oxford, who showed great maturity in his holding midfield role. It is not easy to be so disciplined in that role, no matter how old you are.

Ultimately, it was failing to react to what West Ham were doing defensively that cost Arsenal - but normally that would probably mean them drawing 0-0.

Unfortunately for the Gunners, they ended up losing because their new goalkeeper Petr Cech had an afternoon to forget.

Cech was at fault for both goals but that does not change the fact that he is a terrific keeper who will save them many more times than he loses them points in the future.