Barcelona are without forward Neymar for the Uefa Super Cup against La Liga rivals Sevilla because of mumps.

The game between the Champions League and Europa League winners is being held in the Georgian capital of Tbilisi.

Sevilla midfielder Steven Nzonzi, a summer signing from Stoke, will miss the match because of gastroenteritis.

Defenders Timothee Kolodziejczak and Adil Rami, a recent recruit from AC Milan, are also doubts for Tuesday's game because of the stomach condition.

Barcelona's two summer signings, Arda Turan and Aleix Vidal, who has joined from Tuesday's opponents, have travelled to Georgia but cannot play for their club until January because of a transfer ban.

Left-back Jordi Alba is ruled out through injury. 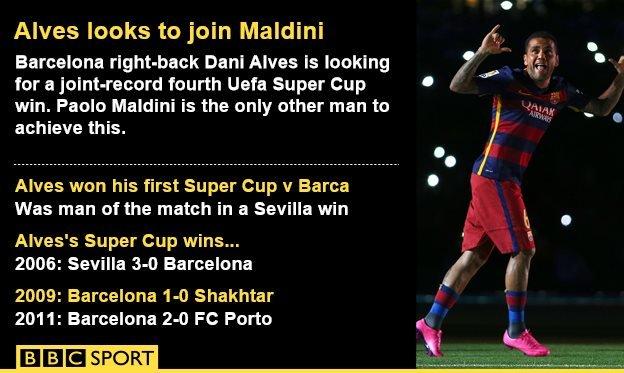 Barca midfielder Ivan Rakitic - who joined the club last summer from Sevilla - said: "This is not any old game for me. There is a lot of Sevilla in me, but not for this game. As I have always done, I'll be giving everything I have to Barca."

It is Barcelona's first competitive game since captain and midfielder Xavi left after 17 years at the club. Croatia midfielder Rakitic said that his role will not change because Xavi has left Nou Camp.

Lionel Messi is expected to start on Tuesday, having reached the Copa America final with Argentina this summer.

Their coach Unai Emery said: "Barcelona are favourites but we will go there with the dream we can spring a surprise. If we beat them, it will boost our confidence and our profile, and give us much-needed impetus for the campaign ahead."