Blues, also still unbeaten in the league this season, led on the stroke of half-time through Stephen Gleeson.

The midfielder's speculative 30-yarder, which deflected in off Derby's Chris Baird, was his first goal for the club.

Ince's pass was lashed into the roof of the net by Russell for his second goal in as many games, the winger having scored a late equaliser in Tuesday's home draw with Middlesbrough.

Chances came at both ends in a lively first 45 minutes, but it was in first-half injury time when the deadlock was finally broken by Gleeson's deflected right-foot shot - the former Wolves and MK Dons man's first goal for Blues on his 45th appearance.

Prior to that, Ince had gone closest when he hit Tomasz Kuszczak's post with a powerful 25-yard drive, while ex-Aston Villa striker Darren Bent dragged Derby's best chance wide when he looked sure to score.

The unrelenting pace did not lessen after the break as Carson parried from Donaldson and the stretching Jon Toral turned the rebound wide.

Russell levelled for Derby and the Rams could have led seconds later when Bent's header skimmed the bar, before Kuszczak pushed a low shot from Bent's former Villa team-mate Weimann onto the post. 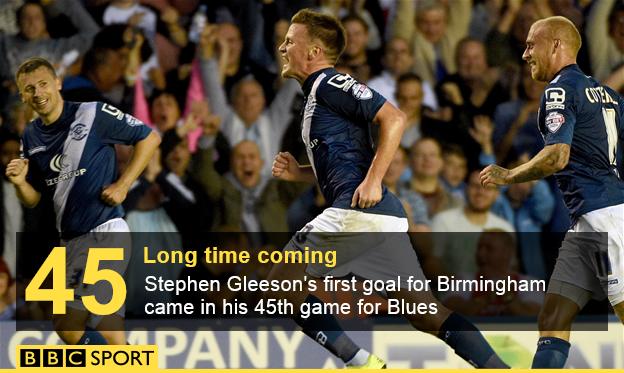 "It was a really good game which the fans probably enjoyed more than the managers, given the amount of chances at both ends.

"Derby might be disappointed with the amount of chances they have had overall, but we should have scored through Jon Toral early in the second half. At 2-0, that might have broken Derby. You have to take those chances or the game turns on its head.

"I'm not disappointed with a point. Look at how far we've progressed from last year, when Derby came here and battered us 4-0."

"I don't think a win's too far away if we keep playing the way we are. I said to the lads at half-time that the chances would come and we're pleased with the response in the second half.

"We were the team more disappointed not to come away with three points as we had more chances, and we should have had a penalty when Chris Martin went over in the box.

"There was clear contact with the top of his foot and the ref obviously thought he dived as he booked him, but he didn't dive."