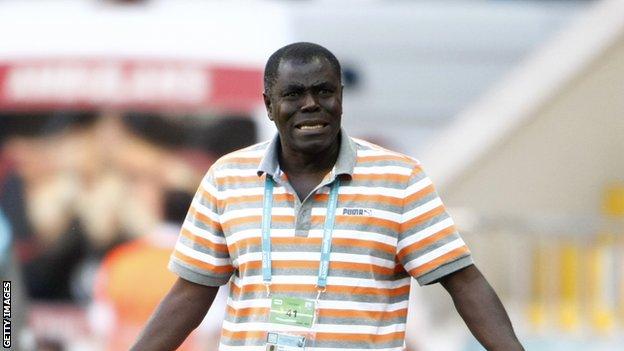 Ghanaian Sellas Tetteh has been named as caretaker boss of Sierra Leone as the search for a permanent coach is put on hold.

Tetteh is the Ghana under-20 coach and will take the Leone Stars job after an agreement between the Sierra Leone and Ghana football associations.

The 58-year-old has been contracted for three months.

His first match will be an African Cup of Nations qualifier against champions Ivory Coast on 5 September.

The venue for the match against this year's Nations Cup winners is yet to be decided as Sierra Leone is currently not allowed to host international games due to Ebola.

Tetteh, who won the 2009 Under-20 World Cup with Ghana, will be assisted by a group of local coaches.

A SLFA statement reads: "The SLFA is honoured to inform the general public that the Ghanaian FA in a solidarity gesture has agreed to a three-month loan with the SLFA for Coach Sellas Teivi Tetteh to serve in a caretaker capacity as national coach for Leone Stars."

"The Ghanaian FA President Kwesi Nyantakyi was keen to lend support to the SLFA as a sign of support and solidarity towards Sierra Leone's determination to continue its participation in the games, despite tremendous mounting odds."

Group I also includes 2017 Nations Cup hosts Gabon but their matches will not count towards qualification. Only the group winners advance to the finals.

The former Black Stars and Rwanda coach will also be in charge of Sierra Leone's first 2018 World Cup qualifying fixtures home and away to Chad in early October.

If Leone Stars progress to the second round Tetteh, will continue in the role against Egypt in November.

The SLFA has put on hold the selection of a permanent coach for Leone Stars until further notice, citing "delays in logistical procedures."

Six coaches have been shortlisted for the job including local trainer John Keister.