Chelsea manager Jose Mourinho has defended his decision to substitute captain John Terry at half-time in the 3-0 defeat at Manchester City.

The 34-year-old was replaced by Kurt Zouma with City leading 1-0 - the first time he has been taken off by Mourinho in the Premier League.

The Chelsea boss confirmed that Terry was not injured and that tactics were behind his decision to replace him.

"It was clear to me Zouma has to play," said Mourinho after Sunday's game. 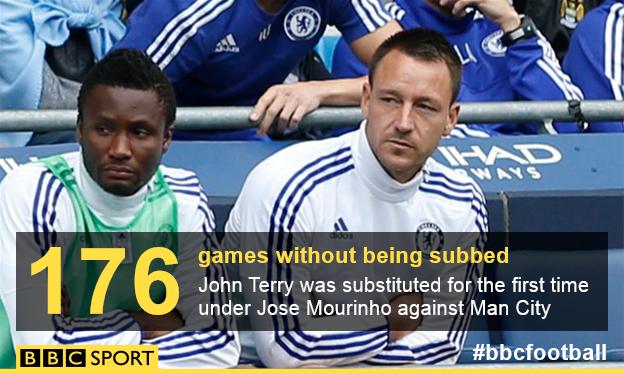 The former England captain fell out of favour under previous managers Roberto Di Matteo and Rafael Benitez but played every minute of every league match last season under Mourinho, skippering Chelsea to their first Premier League title since 2009-10.

Mourinho said in May that Terry would have left Chelsea without him.

"I don't know if you asked questions to Rafa Benitez, Andre Villas-Boas, Roberto Di Matteo, to the ones that never played him," added Mourinho when asked about his decision to bring off his captain against City.

"I'm the one you shouldn't ask because I'm the one that plays with John in every game.

"I made John captain. I recovered John from a difficult situation with other managers.