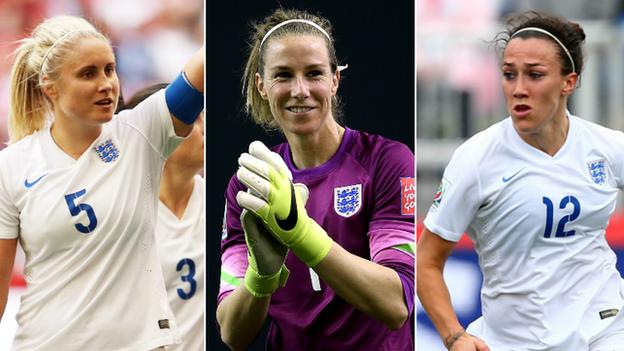 The Manchester City trio were among 23 players selected by Fifa's technical study group.

The Lionesses won bronze in Canada - the best finish by the England Women's team at a World Cup.

Carli Lloyd, who scored a hat-trick against Japan in the final, is among five Americans in the squad.

Lloyd, who also received the Golden Ball as the best player at the tournament, is joined by compatriot and Golden Glove winner Hope Solo.

Like Sasic, England's Bronze was shortlisted for the Golden Ball award, having scored two goals, including a stunning strike as England beat Norway in the last 16.

Houghton played every minute of England's campaign, while Bardsley was substituted in their quarter-final win over Canada with a swollen eye.

However she returned to start in their semi-final loss to Japan and saw out the remainder of the tournament.