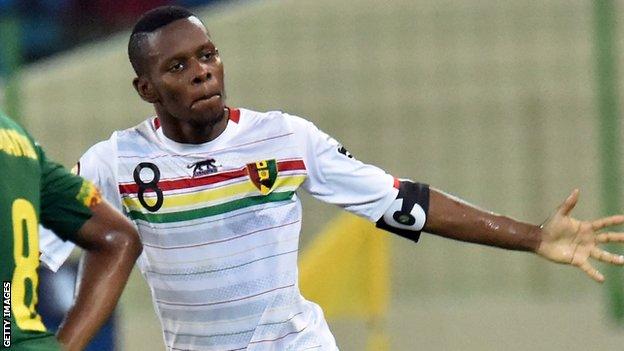 Ibrahima Traore looks set to reject a call-up to the Guinea squad for September's 2017 Africa Cup of Nations qualifier against Zimbabwe.

Reports in France suggest the Borussia Monchengladbach winger will stand by his decision at the 2015 Nations Cup to take a break from internationals.

The 27-year-old made the announcement after a quarter-final loss to Ghana.

"The time has come for me to reconsider my international career in order to focus on my club," he said.

Guinea coach Luis Fernandez, who only took charge of the Syli Nationale in April, has named Traore in a 23-man squad for the 6 September fixture.

But veteran defender Kamil Zayatte, who has been overlooked by Fernandez, has admitted that his playing days are truly over after the latest omission.

"No, it's fine. All is well," Zayatte told French radio station RFI.

"It is the choice of the coach and I respect him. It's time for me now to move on. Good luck Syli ".

Trabzonspor's Kevin Constante and Spain-based Alhassane Bangoura are also in the squad.

But there is no room for Bouna Sarr, who turned down the chance to play for Guinea at the 2015 Africa Cup of Nations in Equatorial Guinea and against Swaziland in June.

Tiny Swaziland stunned Guinea 2-1 in a horror debut for former France World Cup star Fernandez as qualification for the Nations Cup in Gabon began in June.

Diminutive attacker Tony Tsabedze scored both goals in the Group L clash, hosted in Morocco because Guinea are banned from staging international matches following the Ebola outbreak in the country.