Mario Balotelli says he cannot afford to make any more mistakes in his career after returning to AC Milan on loan from Liverpool.

The Italy international, 25, has moved back to the seven-time European champions in a season-long deal.

"I feel like someone who has put the first part of his career to one side. Played and lived like a boy," he said.

"I haven't forgotten how to play football. I am no longer a kid. I've wasted too many chances."

Balotelli is taking a pay cut to move back to Milan, with Liverpool also paying some of his wages.

He scored only one Premier League goal for Liverpool after a £16m move from Milan in August 2014.

The ex-Manchester City player is set to make his second debut for the Rossoneri against Serie A rivals Empoli on Saturday.

'Rodgers wasn't suited to me'

Balotelli scored four goals in 28 appearances across all competitions for the Reds following his arrival a year ago.

But he was left out of the pre-season tour of the Far East and Australia and trained away from the first team before rejoining Milan.

Reds manager Brendan Rodgers signed forwards Christian Benteke, Roberto Firmino and Danny Ings, while Divock Origi is back at Anfield after a year on loan at Lille.

"I take my responsibilities, but the system chosen by Rodgers wasn't suited to my characteristics," Balotelli said on Milan's official website. 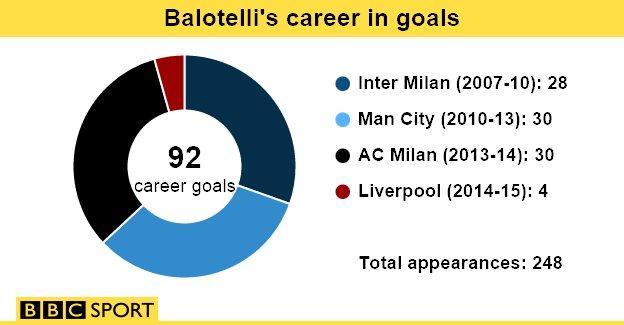 "Mario Balotelli has left Liverpool for AC Milan on loan - and very few at the club will ever wish to see him back at Anfield again.

"The Italian was a £16m panic buy last season when manager Brendan Rodgers was faced with the choice of the veteran Samuel Eto'o, Balotelli or no-one at all. After stating "categorically" he would not sign Balotelli, Rodgers would have been better with no-one at all.

"In every respect Balotelli was a terrible fit for Liverpool. A maverick with no team ethic, he was also completely at odds with the intense pressing style Rodgers employs.

"It was an expensive gamble that failed miserably and Rodgers and Liverpool will now hope it is behind them."

I owe Italy return to my dad - Balotelli

Balotelli has scored 13 goals in 33 appearances for Italy, but has not been picked for the national side since the 2014 World Cup.

Now he hopes his move back to Milan can lead to an Azzurri recall in time for next summer's European Championship in France.

"Yes, I am thinking about it. I want to play well for Milan and earn the Italy shirt again. But for now I simply have to work," he said.

"One step at a time. If I score lots of goals then maybe I will be in France. I want to play at the European Championship - I will do everything I can to achieve that.

"To see me again in the Italian national side was one of my father's wishes before he passed away. I owe it also to him."