West Bromwich Albion manager Tony Pulis is "convinced" record signing Salomon Rondon will score goals, but will need time to get used to the Premier League.

The Venezuela striker, 25, has made three appearances since his £12m move from Zenit St Petersburg but has yet to score his first goal.

"Salomon needs a bit of time to settle in but he's a very intelligent centre forward," Pulis told BBC WM 95.6.

"He will score goals, I'm convinced about that."

Rondon made his debut as a second-half substitute against Watford, and was handed his first start in Albion's 3-2 defeat by Chelsea at The Hawthorns last Sunday.

He came off the bench in Tuesday's League Cup second-round tie against Port Vale, which the Baggies eventually won 5-3 on penalties after a goalless 120 minutes.

"Salomon came on and could've scored four goals - he made some great runs but he's just been a bit unfortunate," added Pulis.

"We didn't want to give him too much game time having flown in just and he's getting used to the country.

"Twenty minutes would have been ideal for him but he'll now get plenty of rest." 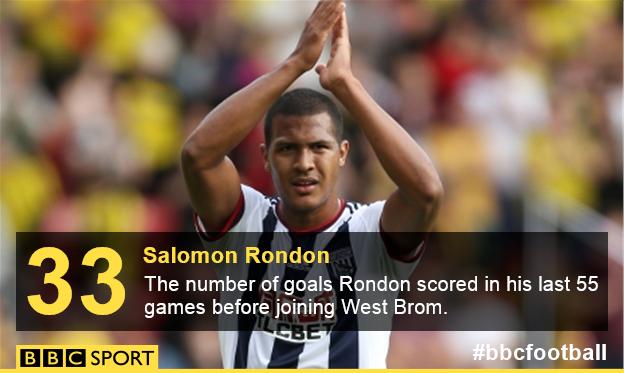