Gareth Bale proved Wales' saviour once again as his thunderous late header gave them a 1-0 win in Cyprus to put them on the brink of qualifying for Euro 2016.

Wales midfielder David Edwards had a goal disallowed and Neil Taylor wasted a fine chance as a full-blooded first half ended goalless.

Scoring opportunities were sparse in a flat second period until Bale headed Jazz Richards' cross into the roof of the net to spark wild celebrations from the travelling fans.

Wales remain unbeaten and three points clear at the top of Group B, knowing victory against Israel on Sunday will seal qualification and end a 58-year wait for an appearance at a major tournament.

No Cyprus slip-up this time

Having missed out on previous tournaments in heartbreaking fashion, there was a keen sense of anticipation as Wales travelled to Nicosia as group leaders following June's win against Belgium.

There was some trepidation too, with Wales losing on both their previous visits to Cyprus.

Those defeats came under John Toshack, who described a 1-0 loss in 2005 as the "worst ever international performance" he had witnessed, while a 3-1 defeat two years later prompted him to accuse his players of "not caring" about playing for their country.

It looked like it might be another frustrating evening in Cyprus when Edwards's goal was controversially ruled out.

The Wolves midfielder headed into the bottom corner but his celebrations were quickly curtailed as referee Szymon Marciniak judged Hal Robson-Kanu had pushed a Cypriot defender.

For much of the game Wales found themselves on the back foot as they struggled to contend with the searing heat and difficult pitch.

But epitomising the 'Together, Stronger' slogan Wales have used throughout their qualifying campaign, Chris Coleman's side stuck to their task.

As the world's most expensive footballer and scorer of five of Wales' eight goals in this campaign prior to this match, Bale was the inevitable centre of attention.

The Real Madrid forward was the target of brutal Cypriot tackling when Wales won the reverse fixture 2-1 in Cardiff and, although neither side shied away from contact in a confrontational rematch, Bale was quiet in Nicosia.

In a rare glimpse of his threat, Bale's dipping free-kick was spilled by Antonis Georgallides, but the Cyprus goalkeeper redeemed himself by saving Taylor's close-range rebound.

At one point, as frustration seemed to mount, Bale over-hit a seemingly simple pass out of play and raised his hands apologetically.

Wales' talisman seemed destined for an uncharacteristically disappointing evening but, with eight minutes left, he rose majestically to head in his third match-winning goal of the campaign.

Behind Wales in the group are Belgium, who came from behind to beat Bosnia-Herzegovina 3-1 at home.

Edin Dzeko, on loan at Roma from Manchester City, headed the visitors ahead but Manchester United's Marouane Fellaini equalised from a Kevin de Bruyne corner.

De Bruyne, who joined Manchester City for a club-record £55m from Wolfsburg on 30 August, then gave his side the lead with a long-range strike before Chelsea's Eden Hazard made the win safe with a penalty. 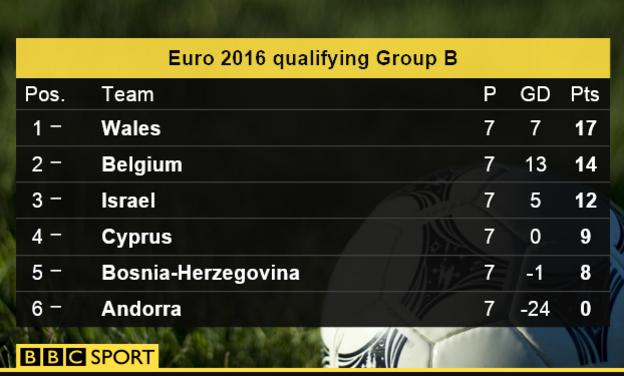 The dramatic nature of the victory added to the Welsh momentum already accelerated by impressive wins against Belgium and Israel.

Bale was pivotal in both those triumphs, scoring the winner against Belgium and netting twice in a 3-0 win in Israel.

Wales welcome Israel to Cardiff City Stadium on Sunday, knowing a fourth successive victory of the campaign will secure their passage to Euro 2016 and a first appearance at a major tournament since the 1958 World Cup.

BBC Radio 5 live pundit Robbie Savage: "There is camaraderie and unity in this Wales team. As they were walking off the pitch there were 20 staff members lined up - and as every one of the players went past each one, they were hugging each other and patting each other on the back.

"It is a unit, and Chris Coleman deserves a massive amount of credit. There is leadership from the back with Ashley Williams." 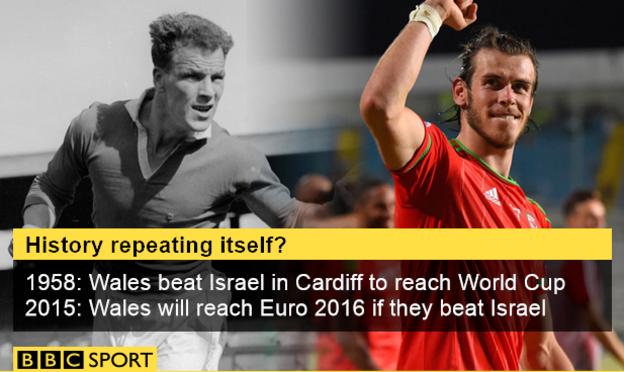 Wales boss Chris Coleman: "We weren't at our best but to come to Cyprus is always notoriously difficult.

"We didn't play our best in possession but we created the better chances and I think it would have been harsh on us if we'd lost.

"I think our players showed their team spirit, work ethic and how much it means to them to play for their country."