Arsenal will face Bayern Munich in the Champions League for the third time in four seasons after being drawn against the German club in the group stage.

Chelsea play Porto, the club Blues boss Jose Mourinho steered to a shock victory in the competition in 2004.

Each team will play six fixtures in the group stage, with the first match days taking place on 15 and 16 September.

All four English clubs avoided drawing either defending champions Barcelona, or Real Madrid, who have won the European Cup 10 times.

Borussia Monchengladbach: Finished third in the German league last season. City have been drawn with a Bundesliga team in all five Champions League groups they've participated in.

"Our opponents could not be more illustrious," said Moenchengladbach sporting director Max Eberl. "This is a huge challenge, but we are looking forward to it because we can measure ourselves against the best."

Juventus: Reached the final last season, where they were beaten by Barcelona, and are the current Serie A champions.

"We are Juventus and must not fear anything or anyone," said Juve chief executive Giuseppe Marotta.

Sevilla: Unai Emery's side won the Europa League for the second year in a row and finished fifth in La Liga last season.

Manchester City director of football services Brian Marwood said: "Historically in the previous four years it's been difficult for us to get out of the group because we have had tough draws. This is no different." 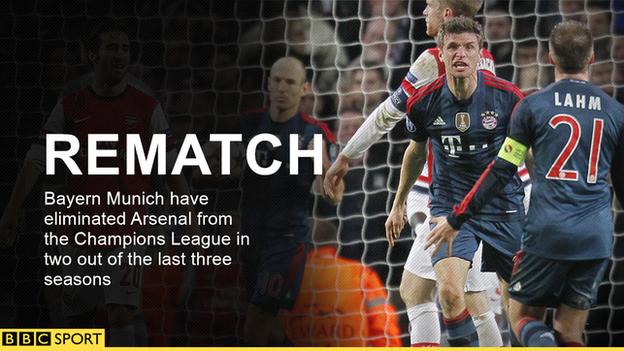 Bayern Munich: Pep Guardiola's side won the German league last year and have eliminated the Gunners in two out of the last three seasons.

Munich captain Philipp Lahm told Uefa.com: "It's great we are meeting two old friends, Per Mertesacker and Mesut Ozil, when we play Arsenal."

Olympiakos: All three of Arsenal's Champions League away games against the Greek champions have ended in defeat.

Dinamo Zagreb: The Croatian champions beat Albanian champions Skenderbeu 6-2 on aggregate in a play-off to qualify. 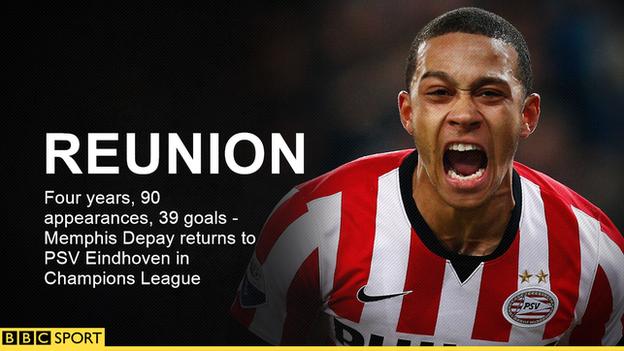 "It is a very tough draw, but also great to play against Manchester United and to meet Louis van Gaal and, of course, Memphis Depay again," said PSV boss Phillip Cocu.

CSKA Moscow: Beat Sporting Lisbon in a play-off to qualify and finished second to Zenit in the Russian Premier League last season.

"I would distinguish Manchester United as a very strong team," said CSKA striker Seydou Doumbia. "Both those games will be spectacular."

Wolfsburg: Won the German Cup and were behind Bayern in the Bundesliga last year. United won both previous Champions League clashes back in the 2009-10 group stage.

"We are satisfied with our draw," said Wolfsburg winger Andre Schuerrle. "The group is tough but it could have been worse."

Porto: Runners-up to Benfica in last season's Primeira Liga, Chelsea have never failed to score in their six previous meetings with the Portuguese club.

"Chelsea are a great team and they have a coach who knows our club and Portuguese football inside out," said Porto coach Julen Lopetegui.

Former Chelsea goalkeeper Carlo Cudicini, now a global ambassador for the Blues, said: "This not an easy draw at all.

"I don't think going to Tel Aviv and Kiev are easy trips."

What have City done to deserve this?

"Manchester United have been made very welcome on their return to the Champions League with a favourable draw in the group stage.

"Manager Louis van Gaal will feel quietly confident of progressing, while the meeting with German side Wolfsburg may be made slightly easier if Manchester City sign their stand-out player Kevin de Bruyne.

"No such luck for City themselves, who must wonder who they have offended when it comes to the Champions League.

"Arsenal's group is not easy, with Bayern the main obstacle, but they should have more than enough to get through, while Chelsea and Jose Mourinho will be delighted with their draw."

"All the English clubs have a realistic chance of going through.

"On paper Chelsea have the easiest assignment. There is no respite for Manchester City, although no-one will relish going to the Etihad Stadium."

What about the other groups?

Valencia, who beat Monaco in a play-off to secure their place as Spain's fifth representative in this year's group stage, will face Russian champions Zenit St Petersburg, French club Lyon and Gent of Belgium.

"He will be welcomed the way he always is when he comes home - like the king of Malmo that he is," said Malmo's assistant coach Olof Persson.

"We're still not ready to play at this level but you can achieve anything when you have a dream," said Astana coach Stanimir Stoilov.