With just three rounds of matches remaining, the destination of this season's Women's Super League One title remains unclear.

After last season's final-day drama, the 2015 title race has the potential to serve up an equally mouth-watering conclusion, with any one of six teams still mathematically able to win the league.

Will leaders Chelsea hold their nerve to claim their first-ever league crown? Could top scorer Beth Mead fire surprise package Sunderland to an unprecedented triumph in their first season after promotion?

With the help of former England goalkeeper Rachel Brown-Finnis, BBC Sport assesses the chances of each of the teams bidding to win WSL 1.

The league title is in Chelsea's hands.

The Blues have a three-point lead at the top of the table and the teams in second and third - Sunderland and Manchester City - must play each other.

If other results go their way, Emma Hayes' side could seal the title before the end of September, provided they can beat Notts County and Liverpool.

If not, they face a potentially decisive clash against Sunderland on the final day of the season.

Last year, Chelsea went into the final day two points clear at the top, but the title slipped from their grasp as they lost 2-1 at Manchester City. Will history repeat itself, or can they banish those painful memories?

"They've gone from strength to strength since the FA Cup final. Their depth of players is at least on a par with Manchester City's but Chelsea have the firepower that will be decisive to go on and win the title. They've learnt from last season so I think, come that last game against Sunderland, they won't make the same mistake twice."

The Lady Black Cats have, without doubt, the toughest run-in as they face the other three title contenders in their last three games.

After topping the WSL 1 table at the end of July, draws in their last two league matches have seen them drop to second.

Being crowned champions is not out of the question, though. If they beat both Manchester City and Arsenal, they will take the title race to the last day of the season when they travel to Chelsea.

However, without a win in their last five games in all competitions, and several key players picking up knocks, their chances seem unlikely.

"Sunderland have had a phenomenal season. They're an exciting team to watch but I don't think they've quite got the depth of squad. I don't think they'll go on to win the title but they're still in contention for the Champions League and I think they would have been very, very happy to be in that position before they kicked a ball this season."

After a poor start to the season, few people considered Manchester City to be title contenders as they headed into the mid-season break.

However, after going on a 10-match unbeaten streak in all competitions since the World Cup, the club now sit third in the table, five points behind Chelsea and with a game in hand.

City's 2-2 draw with Notts County at the end of August could prove to be costly for their title hopes, as victory in that match would have left their destiny in their own hands.

They are now relying on Chelsea to drop points if they are to lift the trophy, but if they can win all four of their remaining games, they will at least guarantee themselves Champions League football for next season.

"I have a feeling that their draw against Notts County, when they threw away a 2-0 lead, will be decisive in City's title aspirations. It's been good to see the momentum they've used in the second-half of the season but, with four games to go, I think the title might be a stretch too far."

Winners of the first two Women's Super League titles and by far the most successful English women's team in history, Arsenal can never be ruled out.

For much of the season, it looked as though the Gunners would offer the toughest resistance to Chelsea's pursuit of silverware.

However, home defeats by Liverpool, Manchester City and Chelsea since the mid-summer break have cost Arsenal dear, and they are now reliant on several other results going their way if they are to win the title.

Spanish boss Pedro Martinez Losa has been at Arsenal for just over a year, and has re-built his side impressively since then, but this year might be just one year too soon for them to be crowned champions.

"It's a toss up between Arsenal and Sunderland for third and fourth for me. There's definitely been something missing for Arsenal. They've had injuries to the likes of Alex Scott, Kelly Smith and Leah Williamson. It's probably taken the sting out of what they've done this season and also the sting out of their hopes for the title." 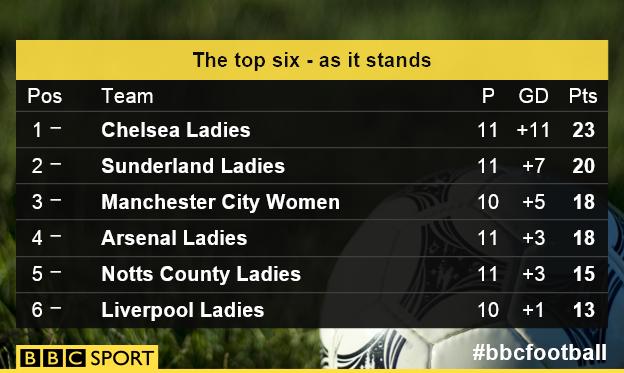 However, Chelsea need only one win to dash those slim hopes.

A second-place finish and a spot in Europe are still up for grabs, and they can both certainly have a say on who does top the WSL table at the end of the season, as both sides face Manchester City and Chelsea in the final month.

Liverpool will have a huge say at both ends of the table, as they also entertain title-chasing Arsenal and finish their season at relegation-threatened Bristol Academy. 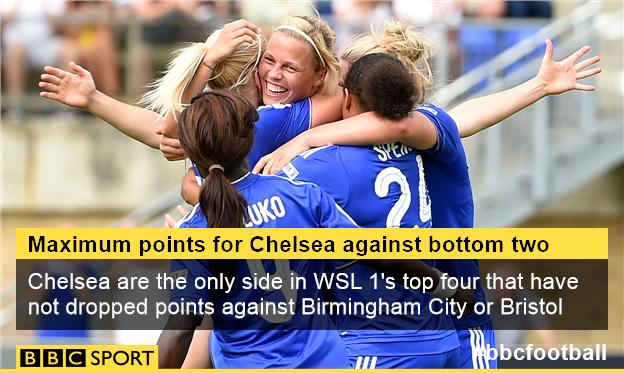 Like the title race, the fight for survival may very well go to the last day as Birmingham City and Bristol Academy try to avoid the drop.

The bottom two face each other in a potentially season-shaping clash on Saturday and will be a tricky obstacle for those looking to achieve glory at the other end of the table.

Arsenal host Birmingham City on the final day, while Manchester City entertain Bristol in the penultimate round of fixtures on 27 September.